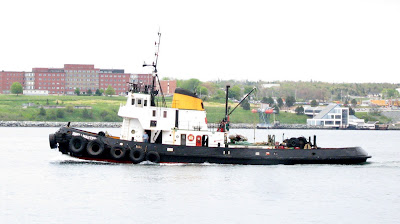 The veteran tug SWELLMASTER returned to Halifax yesterday afternoon. Built way back in 1956, this tug just keeps on trucking for Harbour Development Ltd ( http://www.harbourdev.com/ ), towing dredges and scows and performing other duties.
The tug was built orginally for service in Southampton, England, and was a state of the art, twin screw, fire fighting tug stationed at the Fowey refinery. She was replaced there by more modern tugs and arrived in Canada on her own bottom, to work for Harbour Development. In this service she was re-engined with Caterpillar diesels.
She was orginally named ATHERTON, and was renamed IRVING HEMLOCK when she crossed to this side of the pond. She took on the name SWELLMASTER to fall into line with the naming scheme of the other Harbour Development vessels.
Posted by Mac at 1:07 PM