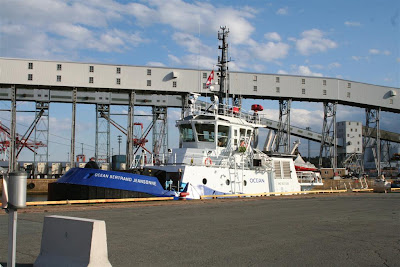 TUG TRIALS
The newest Groupe Ocean tug, OCEAN BERTRAND JEANSONNE arrived yesterday morning for trials. The tug was built by Irving Shipbuilding at their East Isle shipyard in Georgetown, PEI and is the fifth in a similar series for Groupe Ocean.
She is a 5,000 bhp ice class fire fighting tug and is a sister to two tugs delivered in 2o06, OCEAN HENRY BAIN and OCEAN RAYMOND LEMAY.
Groupe Ocean is the largest tug operator on the St.Lawrence River, with tugs based in Quebec City, Trois-Rivieres, Sorel, Montreal and Hamilton, Ontario. They also operate a large fleet of marine construction and dredging vessels and provide tug and towing services in the Gulf of St.Lawrence, in the arctic and off Newfoundland. In addition they also have a shipyard at Ile-aux-Coudres, Quebec where they build and repair smaller ships and tugs.
Irving Shipbuilding's East Isle yard has produced a steady stream of tugs, based on a similar design, but with special features depending on the operator's requirements. Once the tugs are ready for service they come to Halifax for trials, including bollard pull tests. These tests, which measure the pulling power of the tug, are part of the performance criteria established by the owners and which the builders are required to meet as part of their contract. The tug's power rating also has to be established for insurance and documentation purposes. The bollard pull tests have to be performed in deep water, and free from interference, and the the corner of pier 22/ pier 23 is an ideal location.
Groupe Ocean is expecting another tug in this class from East Isle, and they are building two smaller tugs at their own shipyard.
Posted by Mac at 8:54 AM