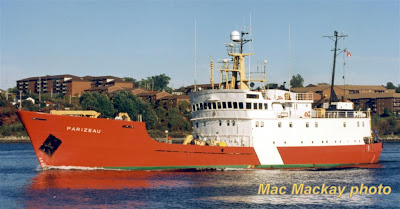 The former Canadian Department of Fisheries and Oceans vessel Parizeau was arrested off Spain on December 22 in a huge drug bust. According to the CBC, Spanish forces intercepted the ship 320 km offshore while bound from the Caribbean to Vigo, Spain. They found one tonne of cocaine on board, and arrested the crew (including one Canadian) and several more people on shore. The CBC quotes a Scotland Yard source, that they were part of a drug ring extending from Columbia to London.

Now called Destiny Empress , the ship was built in 1967 by Burrard Dry Dock in North Vancouver and worked as a research vessel out of Patricia Bay near Victoria.

In 1995 she was transferred to Halifax to replace the similar ship Dawson, which had been retired, and was based at the Bedford Institute of Oceanography.

When she arrived, she still wore the traditional white hull paint of survey ships. In September 1996 she was repainted in the red colours of the Coast Guard/ Fisheries and Oceans vessels.

Her career as a research ship ended in 2000 when she was renamed 2001-04 in preparation for disposal, which occurred in November 2003.

She then laid up at the IEL pier in Dartmouth and was renamed Destiny Empress in January 2005. She sailed June 14, 2005 and went to Shelburne. By October she was in in trouble 280 miles north of Bermuda when she was out of contact for several days. She then reported that she had experienced engine trouble, and was returning to Shelburne.

Reports reached Shipfax in April of this year that she had been sold to a Spanish millionaire.

These former government vessels, with no discern able value to anyone else, seem to attract strange owners, who then go on and do strange things with the ships. Is there a pattern here?

The current case would certainly indicate a very inept lot of smugglers, who do not even bother to change the ship's name for nearly five years, and sail right into the hands of the Spanish navy.

Incidentally the ship is still carried on the Canadian registry, under the ownership of The Empress Investment Group, c/o the Marler Law Firm, Oakville, Ontario.
Posted by Mac at 7:18 PM