Farley Mowat back in town 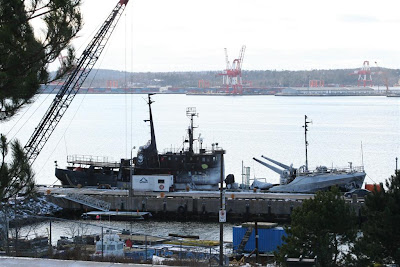 The sealing protest ship Farley Mowat arrived in Halifax on Friday. Detained two years ago in a "run in" with the Canadian Coast Guard, the ship was detained in Sydney and eventually sold at auction. The sale may have fallen through however, but the vessel was on the move nonetheless.
It arrived in tow of the tug Atlantic Elm and is now tied up at the IEL dock, adjacent to the Woodside ferry terminal in Dartmouth. Her presence there has displaced the tugs Atlantic Larch and Atlantic Hemlock, which have tied up at pier 24.
Those lovable folks at the Sea Shepherd Society have put an interesting spin on the whole saga. The SSS claim that they deliberately set up the surrender of their ship as it had become a liability and they left it for the Canadian government to pay the cost of its disposal. In addition the ship built up a sizable bill for wharfage in Point Edward, which was not recovered by the auction sale.
Two Sea Shepherd members, the captain and engineer of the Farley Mowat, were convicted in absentia (they had already been deported) of interfering with the seal hunt.
The ship is painted in the now familiar all black, with symbols painted on the bridge signifying all the "kills" the SSS has claimed over the years in its anti-whaling missions. For some exciting photography on their activites against the Japanese whale fleet, go to their web-site.
Update: An article in the November 13 Halifax Chronicle Herald reported that the ship was sold for $5,000 to Green Ship LLC of Oregon.
Posted by Mac at 7:43 PM