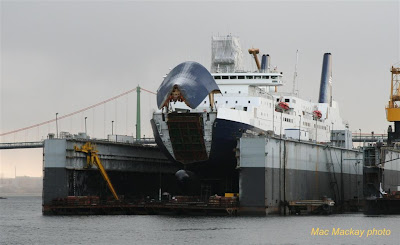 The Marine Atlantic ferry Joseph and Clara Smallwood reposes in the Novadock floating drydock at Halifax shipyard for refit. The 27,229 gross ton ferry was built by MIL Davie in Lauzon, Quebec in 1989 and entered servcie January 10, 1990. Hard to believe the ship is twenty years old!
She was built to service the North Sydney to Argentia run, and is thus provided with more overnight accommodation than her near sister Caribou. Because the Argentia run is a seasonal one, the ship does operate to Port aux Basques on the off season to relieve other ships for seasonal refits.
Named for the legendary Newfoundland premier and his wife, the ship is a very capable vessel, but along with Caribou (built at the same yard in 1985) is nearing the end of its service life. How much longer that life will be is the subject of much speculation.
Purpose built replacements seem to be out of the picture for now, due to cost.
The attraction of second hand Baltic tonnage may be too much for Ottawa to resist. No matter how unsuitable, how huge or how unwieldy they would rather deposit tax money overseas than risk the embarrassment of cost over runs in a Canadian shipyard.
The only yard remaining in eastern Canada that could built such a ship, is the same one the Smallwood was built in. The yard has emerged from borderline bankruptcy and has been limping along of late with some overseas contracts, hoping to revive itself. Wouldn't a nice government contract for three or even four replacements over a five to ten or maybe fifteen year period be just what the doctor ordered?
Lets hope.
Posted by Mac at 9:06 PM