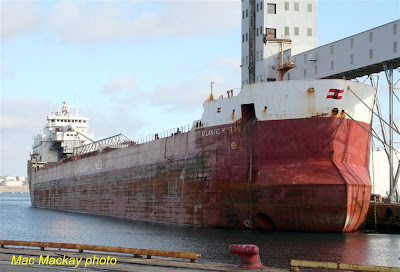 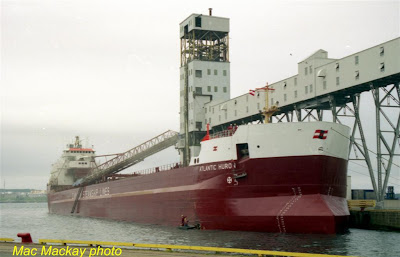 DECEMBER 31 UPDATE: REPORTS OF THIS SHIP'S DEMISE MAY HAVE BEEN PREMATURE-THE SHIP MOVED ALONG THE BERTH ON DECEMBER 30, AND THERE MAY BE WINTER REFIT WORK GOING ON, SO SHE MAY WELL BE SAILING AGAIN. AT THIS POINT ONLY TIME WILL TELL.
In one of those strange ironies Atlantic Huron is also bound for the scrappers. She arrived in Halifax on Christmas Day and tied up at her usual berth at pier 26, but for the last time.
Canada Steamship Lines had the ship built as the conventional bulk carrier Prairie Harvest in 1984 at Collingwood shipyard. Demand for self-unloading ships was building at that time, and in 1989 she was converted to a self-unloader at Port Weller DryDock and renamed Atlantic Huron. The new name recognized the fact that she would be able to trade on the Atlantic as well as the Great Lakes, and she was soon put to work in a variety of trades. She frequently brought grain to Halifax - unloading at pier 26. The cargo was often loaded in Thunder Bay, ON, and then topped up with corn in Windsor, ON. The cargo was used for milling and animal feed in the Atlantic region.
In 1990 she was shifted to Nassau registry and traded under that flag until 1992, but was back under the Bahamas flag a short time later.
When the original Melvin H. Baker retired [see the story below] Atlantic Huron was renamed Melvin H. Baker II arriving in Halifax April 16, 1994 with that name. She took up the gypsum run from Dartmouth until 1997 when she returned again to Canadian flag and refitted at Lauzon, QC. She reverted to Atlantic Huron at that time, and was fitted out to carry magnetite slurry, with special pumping gear fitted on her bow. Most of the work was done in Dartmouth. The slurry, a mixture of water and heavy iron ore, was loaded in Newfoundland and taken out to sea to ballast down the Hibernia gravity base. The special pumping gear and pipelines permitted the material to be delivered precisely into the cells of the base. After this operation the ship came back to Dartmouth, where the gear was removed and the ship restored to her previous condition and trades.
In December 2000 she arrived in Halifax for bottom rebuilding in preparation for widening. That work was done at Port Weller starting in December 2002. Prefabricated hull sections were grafted to the ship to take advantage of new regulations on the St.Lawrence Seaway allowing ships to be 78 feet wide, an increase from the previous 75 feet.
And now, as they say on the Lakes she is "done." Sold to Chinese breakers, for the same price per tonne as her illustrious predecessor.
There will be a major exodus of ships from the Great Lakes (it has actually already started) reflecting a major drop in business in the past year. The demand for iron ore for steel making (and then for automobiles) has dwindled and many ships are no longer earning their keep. Most will be bound for the scrappers, either under their own power or under tow.
The aging Canadian Great Lakes fleet needs renewal, and the governments stated intention of dropping the duty on ships built overseas, will spur shipowners to rid themselves of older ships and buy some new or used vessels from abroad. However the numbers of ships needed will be small in comparison to the size of the present fleet. Many familiar names will soon be gone, and their likes will never be seen again.
Photos show:
bottom:
Melvin H. Baker II, October 18, 1995 with black hull.
middle:
Atlantic Huron, July 8, 2003 showing her widened hull.
top:
Atlantic Huron, December 28, 2009 in her present bedraggled condition.