CCGS Louis S. St-Laurent left the Novadock today, in control of two tugs, and moved to the Bedford Institute of Oceanography (BIO). The ship had to cut short its summer research work in the western arctic with a loose prop nut. The situation was detected about September 19, and the ship went to anchor off Cambridge Bay to attempt on site repairs. These were not possible, and the ship headed back through the Northwest Passage on two props, arriving Halifax November 9. It entered the Novadock the next day and has been there ever since. Last year there was a shaft bearing issue, and as might be expected of a ship its age, these problems may continue until a replacement arrives in 2017. (That replacement, to be named CCGS John G. Diefenbaker will be built by Seaspan in British Columbia under the new shipbuilding procurement program.) 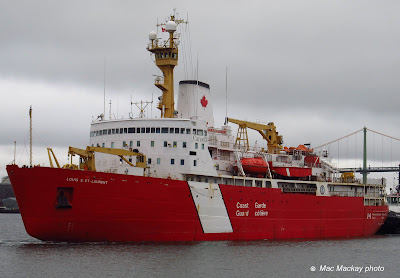 1. Louis S. St-Laurent clear of the Novadock at noon time today, and headed for BIO. 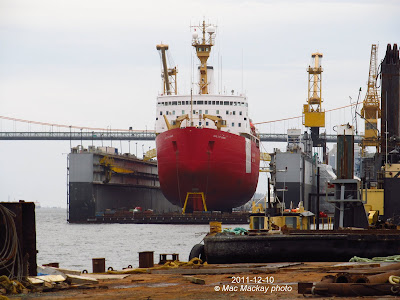 2. Louis shows the shape needed to make way in the arctic.


But if you think we have problems, they are nothing compared to the US Coast Guard. They have only one operational polar class icebreaker, USCG Healy, which was working on the joint venture mission with Louis S. St-Laurent in September. It also had to return home. Both the USCG's other polar icebreakers are out of service. USCG Polar Sea had an engine melt-down in 2010 and will be decommissioned by the end of this year. Its sister Polar Star is in a life extension refit and will not be back in service until 2013. It will also cannibalize parts from its sister to complete the refit, meaning that Polar Sea will never be refitted. 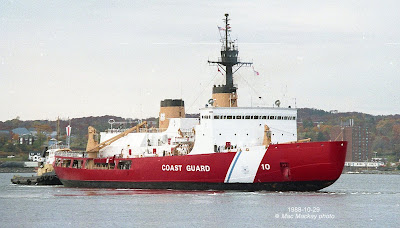 3. USCG Polar Star in Halifax. She had to go east about to reach her Seattle base in 1988 due to heavy ice in the western arctic. The ship is powered with 6 diesel/electric units and 3 gas turbines. In gas turbine mode she develops 60,000 shp continuous, 75,000 demand shaft horsepower.


The USCG also has responsibilities in the antarctic, but Healy is not powerful enough to go there, so the USCG is in a pickle. They have apparently chartered the sister ship to CCGS Terry Fox, the Vladimir Ignatyuk for the arctic, but it is a light displacement ship and doesn't have the weight to battle through thick ice, so it won't be heading south. 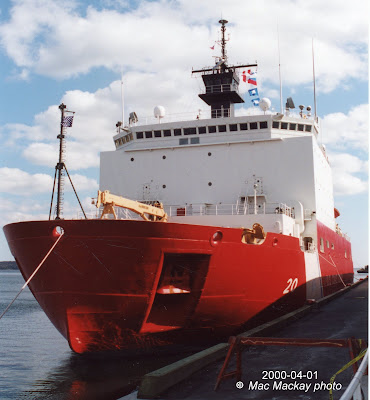 4. USCG Healy in Halifax on her maiden voyage. Built in New Orleans, she took the northern route to reach Seattle. She can produce 30,000 shp with her 4 x diesel/ 4 x alternator/ 2 x electric motor system. That's good for 4.5 feet of ice continuous.


Even the Russians are having to spend big money to keep their fleet in service. As one commentator said, it's a great time to be in the icebreaker repair business. Halifax Shipyard has certainly been in the forefront of keeping Louis S. St-Laurent in service since it went into service in 1969 (built by Canadian Vickers in Montreal.) The multi-year mid-life refit project (1987-1993) saw the ship get a new bow, and a new propulsion system. Its original 3 steam turbine/9 generator*/ 3 electric motor system developed 27,000*shaft horsepower. The new system of 5 diesels/ 3 generators/ 3 electric motors gives something in the same range.
[* corrected after initial posting-see Comments. 110% = 29,700 shp]
Addendum: It is difficult to get the right info on power for icebreakers, as "Installed Horsepower" is often used, i.e. the total of all the bhps of the engines-but this is not the delivered horsepower at the shafts. Some sources do not distinguish between ihp and shp, but there is a loss, particularly in diesel-electrics or steamturbine-electrics , which should be accounted for. As with tugs, all horsepower ratings should be taken with a grain of salt.
.
Posted by Mac at 5:23 PM