GSF Grand Banks - big rig and a semi too 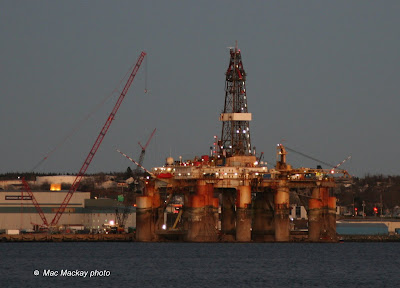 1. Safely alongside at Woodside, shore cranes are mobilizing to start repair and refit work. 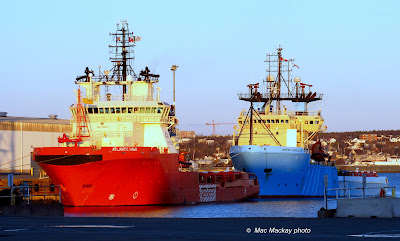 2. The tug/suppliers have completed the tow and are taking a breather at pier 27.

Not all rigs and semis are trucks!

GSF Grand Banks is certainly a big (drilling) rig and a semi-submersible too. It has been working on the West White Rose field off Newfoundland for Husky Oil. On November 24 it was water injecting at well E18-11 when the supplier Maersk Detector made contact with the rig and tore a 5m hole in one leg. Fortunately for all involved, the hole was in a ballast tank and was isolated easily. Also the supply boat was not seriously damaged. No one had to be evacuated from the rig, and the work could be suspended without any serious consequences to the environment.
The incident does point out that the offshore is a dangerous place, and despite all the hi-tech marvel;s, such as Dynamic Positioning, accidents do happen.
The rig was scheduled for maintenance in January, and this date was moved ahead, and it arrived in Halifax today in tow of Atlantic Hawk and Maersk Chancellor. It was tied up at the Woodside dock in Dartmouth where repairs and refit will take place.
The rig is a semi-submersible, of the Aker H-3.2 type, which is a second generation rig (meaning essentially that the column legs sit on ship-shaped pontoon hulls). It was built by Saint John Shipbuilding and Drydock in 1984 as Bowdrill 3 , but was actually completed in Halifax. This was long before Irving Shipbuilding owned the Halifax Shipyard, and it meant moving a workforce to Halifax to complete the rig, where the tide range is much more favourable. The rig can work in 1,500ft of water and can drill to 25,000 ft.
The rig was renamed Glomar Grand Banks when it was sold by Husky Bow Valley to Global Marine Drilling, and under that name was in Halifax in 2002 for refit.
It was renamed GSF Grand Banks after Global Marine and Santa Fe merged in 2001, becoming the world's second largest drilling contractor. In 2007 Transocean (which had already taken over Sedco and Forex) and was already the world's largest marine driller merged with GSF forming an even larger world's largest!
The two anchor handling supply tugs that towed the rig in are Atlantic Hawk, built at Halifax Shipyards, and operated by Atlantic Towing and Maersk Chancellor, operated by Maersk Supply Service Canada Ltd. Each tug generate 14,400 bhp. When working, the rig is anchored in position with eight huge anchors (set and recovered by the tugs) and is semi-submerged to 72 feet draft. When towing it is pumped up to 36 feet draft and can use its thrusters to assist in moving or to 23 feet draft. At the shallowest draft, the thrusters are no longer functional. When alongside for repairs it is generally at the shallow draft, and anchored to the shore.
.
Posted by Mac at 7:34 PM