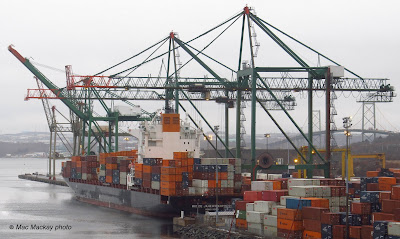 First time caller Rio de Janeiro Express tied up at Cerescorp's Fairview Cove container terminal this morning. Slightly smaller than the usual Hapag-Lloyd ships we see, it is rated at 4250TEU with 400 reefer plugs. Built in 2007 by Samsung HI, it measures 39,941 gross tons and 50,500 deadweight. [The usual H-L's are 4864 TEU and about 33m longer]
One interesting aspect of the ship is that this is the first H-L ship to call that is part of the Seaspan Corp fleet. Built up since 2001 by the Washington marine group of Vancouver, Seaspan Corp and its operating arm Seaspan Ship Management Ltd, now have 65 ships in their stable, all long term, fixed-rate time chartered to the major container lines.
Seaspan Corp has an interesting web site, with an interactive position map of all their ships. Go to:http://www.seaspancorp.com/index.php
The name Seaspan is better known as the operators of the largest west coast Canadian tug fleet, and the Vancouver and Victoria shipyards. However since its acquisition by the Washington family, the name has been co-opted to other branches of the far flung shipping/ shipbuilding/ transportation empire.