Sunset for the Sanderling? 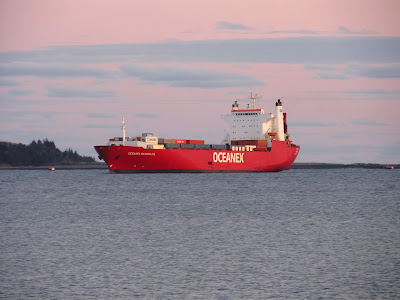 An announcement appearing in a recent edition of Marinelog may mean that a replacement for the Oceanex Sanderling is on the way.
An unidentified Canadian owner has booked an order for a Con Ro (Container RoRo) ship with the Flensburger yard in Germany.
Read the details here:
http://www.marinelog.com/index.php?option=com_content&view=article&id=1680:2011dec00143&catid=1:latest-news&Itemid=107

I can think of only one Canadian shipowner that would need a ship such as this, and it is Oceanex. The aging Oceanex Sanderling is still soldiering on, despite an advanced age, and has provided sterling service over the years, but its time must surely be coming soon.
Built in 1977 (!) by Sasebo Heavy Industries in Japan, it served the now defunct DDG Hansa as Ravenfels until 1980, then became Essen briefly for a Hapag-Lloyd subsidiary. In 1981 it was renamed Kongsfjord by S.E.A.L RoRo, a Norwegian American Line service in East Africa/ Indian Ocean. That only lasted until 1983 when it went to Amasis Rederei of Germany (Heyon-Janssen) as Onno.
It was under the latter name when it made its first appearance in Halifax as a substitute on the ACL Line service on April 12, 1987.
Later the same year Atlantic Searoute Ltd bought the ship and it became ASL Sanderling and a Halifax regular. It entered service January 10, 1988, running Halifax / Newfoundland, which it has done pretty much continuously ever since, aside from refits. Most recently those have been December 2008-March 2009 in England and January- February 2011 in Gibraltar.
It was renamed in Oceanex Sanderling in 2008, although Oceanex had succeeded ASL in 1991.
No delivery date was given for the new ship, and Oceanex has not made an announcement, but it would be at least a year if not more for a sophisticated ship such as this to be delivered.
.
Posted by Mac at 9:56 PM