Bunkering tanker Nore at Pier 9B

The Malta flag bunkering tanker Nore arrived (in dense fog) at pier 9B today. A sister ship to the Halifax bunkering tanker Algoma Dartmouth and the Come-by-Chance tanker North Atlantic Kairos  it has apparently been acquired by Canadian owners. 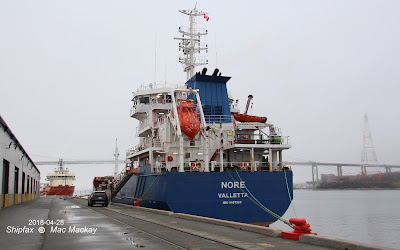 By late afternoon the fog had cleared and rain stopped enough to get a "through the fence" look at Nore at Pier 9B. (That is Atlantic Condor at Pier 9C in the background.)

[ The only potential buyer for such a vessel that I can image is indeed North Atlantic Refining Ltd (NARL), owners of the Come-by-Chance refinery and a growing retail operation in Newfoundland and Labrador, now with 53 gas stations and 14 Orangestore locations. From its origins in 1973 the refinery has had five owners, with the latest taking over in September of last year. The new owners, Silver Range Partners LLC of New York acquired the business from Harvest Energy a subsidiary of the Korean National Oil Corp. NARL under Silver Range ownership is marketing its low sulphur products more widely, and its tanker North Atlantic Kairos was here twice in March with product for Wilson's Fuels. Although nominally a bunkering tanker, the ship can carry a a variety off fuels and is more than capable of short sea voyages.]

The above was a wild guess, and apparently quite wrong.  Certainly no other east coast operator would be in the market for such a vessel, but I had forgotten that Canada also has a west coast! Word has reached me that it will be going to British Columbia -the first Canadian flag coastal tanker there in many years- and will be named AC AQUARIUS for as yet unidentified owners.

(Another Newfoundland operator, Coastal Shipping, part of the Woodward Group, has acquired tow tankers recently Icdas-09 and Icdas-11 are 13,097 grt, 19,984 dwt are ice class Turkish built by Icdas, Biga in 2010 and 2011 respectively. No new names have been announced yet. Coastal has rarely renamed their tankers after acquiring them from European owners, but perhaps they will make an exception in this case and chose some northern Canadian names that reflect the areas they will serve.)

Nore was built in 2007 in Tuzla, Turkey, with construction started by Dearsan Gemi and completed by Yardimci Gemi Insa SA. It measures 2999 grt and 3569 dwt. Built as Samistal, it was renamed CT Wexford in 2008 and from 2011 flew the Russian flag as RN Taurus. Early this year it was renamed Nore for Arsland Nore Ltd under Turkish management. [That the first three NOR appear in this name and in NARL can't be a coincidence.]

Nore followed a similar trajectory to North Atlantic Kairos sailing from Tuzla, bunkering in Ceuta and arriving at Pier 9B. North Atlantic Kairos arrived as CT Wicklow (launched 2008 as Clipper Boca, 2985 grt, 3669 dwt) June 16, 2016 and was soon renamed and reflagged to Canada. I expect the same to happen with Nore.