The stars were out in daylight today - at least as far as ship's names go.

ACL's Atlantic Star called on the eastbound leg of its voyage AST0918, next stop Liverpool, UK. Arriving and departing through the Narrows it passed Asian Sun and Horizon Star. 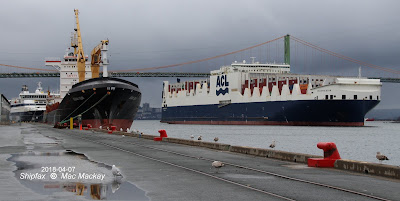 Asian Sun is at pier 9B for a two week maintenance period. 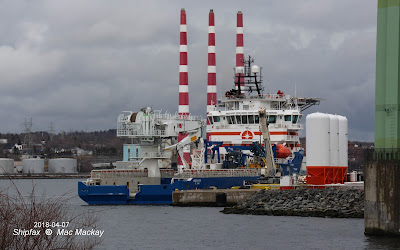 At pier 9C Horizon Star was loading more drill riser for the offshore rig West Aquarius which has now taken up its drilling position  about 250 nkm off the southeast coast. It will drill one well for BP. BP has hired two more suppliers through Halifax based Horizon Maritime and registered them in Canada. Lundstrom Tide (3943 grt, built 2013) and Troms Sirius (4201 grt, built 2012) are owned by industry giant Tidewater, but appear to have been bareboat chartered to Horizon. So far they have been working out of Mulgrave to mobilize West Aquarius. However Horizon Star must come to Halifax to pick up the risers as the two month (minimum) project progresses. It is also apparently picking up cement and fluids from the new MI-Swaco tank facility at the far north end of pier 9C. 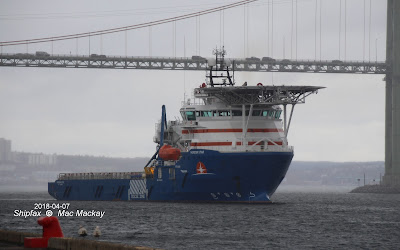 As soon as Atlantic Star had passed Pier 9c the supplier Horizon Star moved from 9C to 9 to take fuel from Wilson's Fuel's pipeline. It was being chased by a rain shower, precluding a closer shot.

Further down the harbour at pier 31 the Augusta Mars (see yesterday) was unloading, but  will sail this evening ahead of the next big storm and head back to Europe. It apparently will establish its own orbit.

The only exception to the stellar cast above were also at the deep water piers. The Large Car and Truck Carrier (LCTC) Undine discharged some machinery at pier 27 after visiting Autoport with cars.

Built in 2003 by Daewoo Shipbuilding + Marine Engineering Co, Okpo, it was lengthened by about 28 meters in 2006 by Hyundai-Vinashin, Ninh Hoa yard in Viet Nam.  The added space projected it into the LCTC ranks with a capacity of 7,194 CEU. It has a relatively light 125 tonne stern ramp, but that still allows it to carry a variety of heavy equipment. 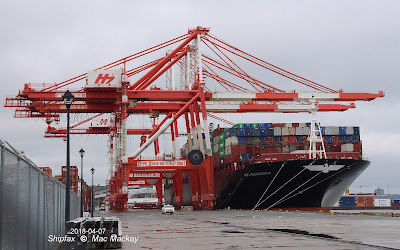 Daewoo set up a wind turbine factory in Nova Scotia, with $56mn in government assistance. However the plant (and the company) fell on hard times, the plant was closed, with the province, as 49% owners,  left holding the bag so to speak. They now have to decide whether to demolish the plant or sell it off in pieces, as no new owner has come along. It is the former Trenton Car Works, in Pictou County. Daewoo has been in the news recently over additional convictions in corruption cases that extended to the President of South Korea.

A major storm developing off Cape Hatteras will work its way up across Nova Scotia tomorrow, with 10-15 cm of snow (which converts to "a lot" in Imperial units). That may be why there are no arrivals departures or moves scheduled so far for tomorrow.