With no bunkering facility available in Saint John, NB, tankers sometimes come to Halifax to top up their fuel tanks. After discharging a cargo of North Sea crude in Saint John, the Helga Spirit bunkered in Halifax today. The tanker is owned by Teekay Shipping, a Danish company in origin (T.K. were the initials of its founder Torben Karlshoej), but has operational functions spread around the world, including a core services centre in Vancouver. It is currently the world's largest operator of mid-size tankers with a fleet more than 100 ships. 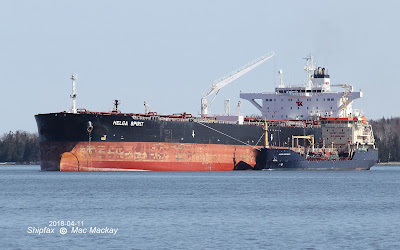 Helga Spirit was built by Samsung,in Koje, SK in 2005. At 62,929 grt, 115,515 dwt, is is classed as a Large Range 2 or Suezmax ship. (However the latter designation my change as maximum Suez Canal dimensions have been increased with Canal widening.).

Teekay has also recently taken delivery of the third and last of its new shuttle tankers to serve the nine oil companies operating off Newfoundland. Dorset Spirit joins Beothuk Spirit and Norse Spirit delivered last year. Helga Spirit is headed for Whiffen Head, NL, where it will load some of that offshore Newfoundland crude for delivery to an eastern seaboard refinery. It is a frequent caller in Philadelphia, so that may be its ultimate destination.

A pier 9C more work was underway on Fundy Rose. After a week or more of seeming inactivity, workers appear to be concentrating on the emergency evacuation deployment system. 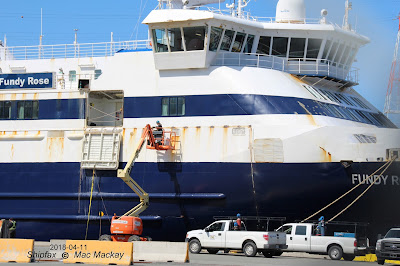 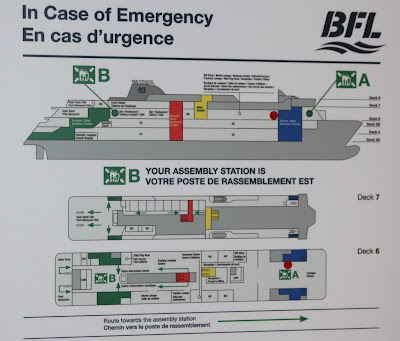 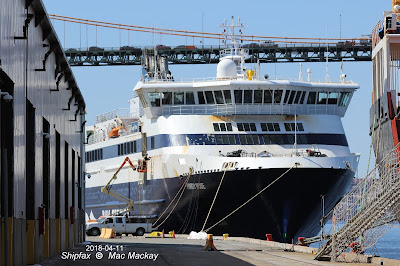 The ship is now scheduled to resume service between Digby, NS and Saint John, NB on April 27.

In the outer part of the harbour CCGS Earl Grey was assisting in training small boat handlers for summer inshore rescue craft. Crewed by students of the Canadian Coast Guard College, the boats respond to Search and Rescue calls in harbours throughout the region when recreational activity is at its peak. 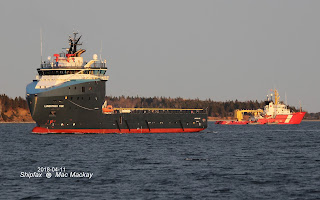 As the supplier Lundtrom Tide arrives (see Tugfax) small craft work from CCGS Earl Grey. It is ideal for this kind of work due to its exceptionally low freeboard aft. It was built along supply vessel lines, but as this photo contrasts, those vessels have continued to evolve in  unforeseen ways.