The Canadian Wheat Board was the sole purchaser of Canadian prairie grain, with profits handed back to the farmers. In 2012 the government opened the market, from "single desk", renaming the Board the CWB and in 2015 a majority interest was sold to private industry. Farmers retained a 49.1% interest in the new entity, named G3 for Global Grain Growers. 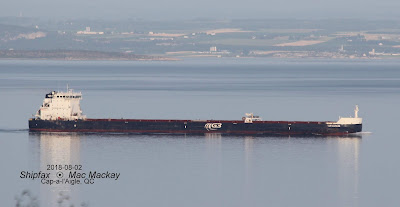 Algoma operates the Equinox class laker G3 Marquis for G3. It was orginally named CWB Marquis. It brings grain down from the Lakes and returns upbound with iron ore.

The 50.1% majority in G3 is held by a joint venture of Bunge Canada and SALIC. SALIC is the Saudi Agricultural and Livestock Investment Company. In 2016 SALIC bought half of Bunge's interest, increasing its stake from 49% to 75% of the joint venture (resulting in a 37.575% holding in G3)


When Canada offended Saudi sensibilities by criticizing its human rights record, Saudi Arabia announced it would no longer import Canadian grain and would sell all its Canadian investments "no matter the cost". This obviously raises concerns about the future of G3. To complicate matters it is understood that ownership of Bunge may be in play, with an unsolicited acquisition offer from ADM (Archers Daniel Midland). No official comment has been made on the situation. 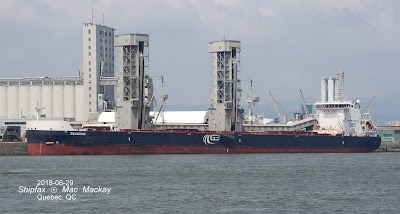 G3 Marquis unloading a the G3 Quebec City terminal.
G3 owns a slew of elevators on the prairies and in Quebec and port terminals in Thunder Bay, Trois-Rivières and Quebec City, and is building a new port terminal in North Vancouver in partnership with Western Stevedoring. However with the formation of CWB and G3 the Port of Churchill lost its source of cargo. Halifax however was not particularly affected since its export grain traffic is negligible. 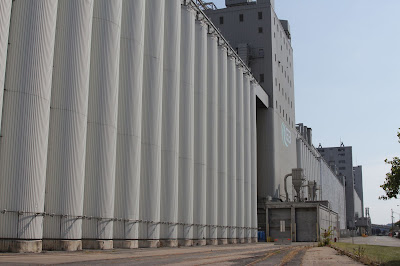 Part of the huge Quebec City terminal.
It is business as usual in Quebec City as far as I can tell, with a constant stream of lakers bringing in grain, and saltwater ships loading for export. 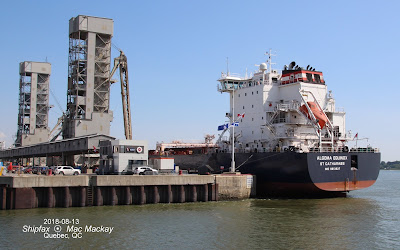 Algoma Equinox unloading by means of the two travelling grain legs. The rail mounted towers  move along the length of the ship to reach the holds. 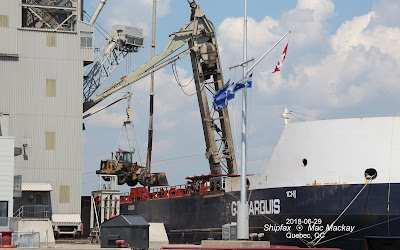 Once the legs have removed most of the cargo, front end loaders move the remainder to picked up by pneumatic tubes. Hand sweeping follows.
Note the wheels under the tower at left.

There has been no official comment on the future of G3 and participation by SALIC. 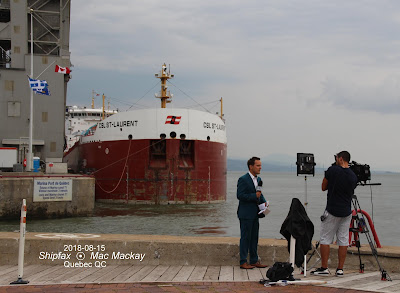 With no one to interview, journalists had to satisfy themselves with general views of the Quebec facility, and the Trillium class CSL St-Laurent unloading.