Media reports that Halifax-based Clarke Inc has cashed in on its last remaining movable asset. By increasing its loan from $900,000 to $4 million Clarke now has some cash to spend but no immediate plans to spend it. 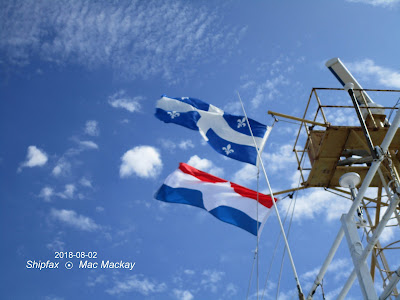 The Clarke flag still flies on one ship.

Once the largest coastal shipping operator on the Lower St.Lawrence River, Clarke has been down to one ship for many years, the ferry Trans St-Laurent. I crossed the St.Lawrence on that ferry yesterday from Rivière-du-Loup to St-Siméon as I do several times each year. 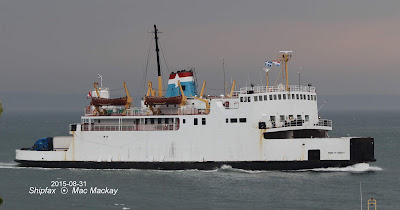 Not a great beauty, Trans  St-Laurent has been a fixture on the river for five decades.

It has been operating under a series of two year contracts with Société de Traversiers du Quebec (STQ). That crown corporation, established in 1973, to operate all the major ferry services in the Province of Quebec, took over ownership of nearly a dozen ferries crossing the river at such locations as Sorel / St. Ignace-de-Loyola,  Quebec City / Lévis, Montmagny / Ile-aux-Grues,  St-Joseph-de-la-Rive / Ile-aux-Coudres, Baie-Ste-Catherine / Tadoussac, and Baie Comeau /Godbout / Matane - all but Trans St-Laurent .

Trans St-Laurent was built in 1963 and rumours that it will be replaced have been rife for years. It is nothing less than amazing that the ship is still operating at its age, but it continues to provide reliable service with up to four trips per day. It shuts down in January and February, due to winter conditions, but there has been pressure to make the service year round. 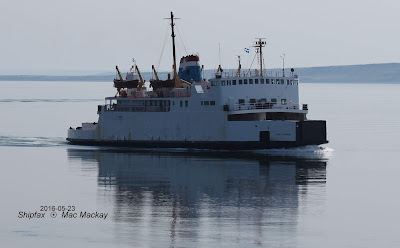 There has been a study for a new ferry, conducted by STQ, but it is not clear if that will be an STQ-owned vessel, however it seems likely that it is time for a change. Trans-St-Laurent has a capacity of 400 passengers and up to 100 vehicles. Yesterday on my crossing however there was one semi, several RVs (one towing a car) and at least three trucks with travel trailers, a few motorcycles and some pedestrians.The rest of the car deck and the two portable suspended decks were stuffed to the gills with cars.

Clarke Inc sold its large trucking operation to TransForce in 2013, and is now largely an investment company. 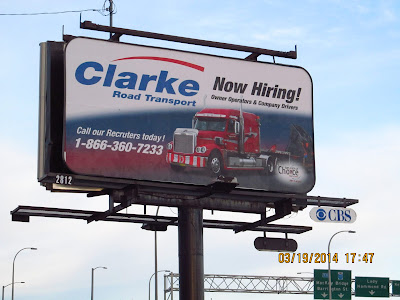 Truckfax claim to fame - they used one of my pictures on this billboard at the entrance to the Fairview Cove container terminal, well positioned so that every truck driver leaving the facility could not miss it.