The container RoRo ship Oceanex Connaigra suffered a fire in its cargo hold at 22:30 hrs August 16. The ship was on its regular weekly run from St.John's to Montreal when the fire broke out near Bécancour, QC. 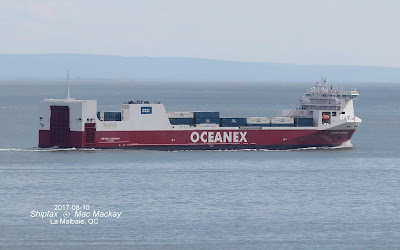 Oceanex Connaigra was built in 2013 in Flensburg, Germany, and is the largest Canadian ConRo ship. With a capacity of 1300 TEU, the ice class vessel maintains a year round weekly schedule.

According to a press report the ship put into Trois-Rivières at 05:30 hrs the next morning where local firefighters extinguished the fire. The ship was able to resume its voyage by 10:16 hrs.

I have not been able to locate more detail than this, but from the description the fire would not seem to have been serious, and had minimal effect on the ship's schedule. Oceanex maintains a 99% reliability on its weekly services to Newfoundland.