The three Norwegian icebreaking tug/suppliers purchased by the Canadian government arrived in Quebec today. They sailed in company up the St.Lawrence this morning, in and out of fog for much of the way. 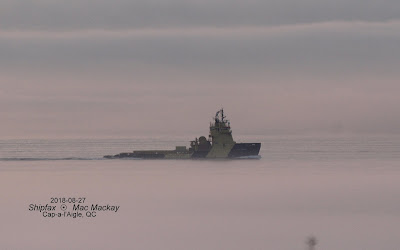 Thor Viking upbound on the St.Lawrence this morning, found a clear patch off my place.

The lead vessel, Balder Viking was barely visible from my vantage points, with only its mast top showing. The second, Vidar Viking revealed itself somewhat, while passing between Ile-aux-Coudres and St-Joseph-de-la-Rive. 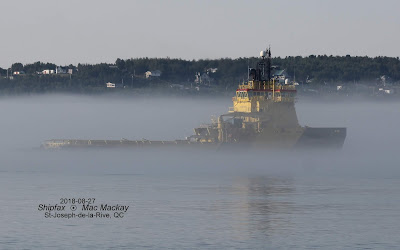 and the third, Thor Viking did show itself again as it passed through billowing fog, 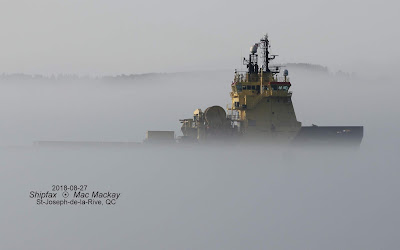 Thor Viking  has a container on deck, probably carrying spares and other gear.

On August 10, the Canadian government announced that it had purchased the the three sister vessels from the ailing Norwegian company Viking Supply Ships AS and had awarded a $610mn contract* to Davie Quebec to refit the boats for service with the Canadian Coast Guard, thus protecting 200 jobs at their Levis, QC shipyard.

The 13,440kW vessels, built in 2000-2001 are classed as Ice-10/ARC 7, Icebreaker, Anchor Handling Tug Suppliers and are intended to fill the large gap in the CCG's icebreaking capability until new ships are built. The current aging fleet is scheduled for mid-life refits in turn, reducing the CCG's arctic and St.Lawrence capabilities.

The Viking ships left Landskrona, Sweden on the day of the government announcement. In the same announcement Ottawa revealed that it will permit Davie to bid on future Coast Guard and RCN contracts, even though it is not included in the national shipbuilding strategy program.

Quebec is in the early stages of a provincial election where the sitting Liberals are fighting an uphill battle. The federal Liberals, in power in Ottawa, may get more credit for making this deal happen, but it will be interesting to see how the arrival plays out in the press, if not the voter's minds.

As for the national shipbuilding program, one of the two designated shipyards, Seaspan, is supposed to build the CCGS Louis S. St-Laurent replacement, but neither it nor Irving Shipbuilding (Halifax Shipyard)  have the capability of building needed Coast Guard icebreaker replacements unless they interrupt their navy and other government work, or add capacity. When Davie has the capability immediately available, it seems entirely reasonable that they should be eligible for the work.

It does bring into question what use the navy's Arctic Offshore Patrol vessels will be. Halifax Shipyard is building the half dozen of these vessels that the previous federal government decided it needed to protect arctic sovereignty (seasonally). Pundits claim the ships are too light for icebreaking and to heavy for patrol work, so it seems unlikely that they will be of much help to the CCG except in case of emergency.

Emergencies do happen. The grounding of the research / cruise ship Akademik Ioffe last week in the high arctic, required the evacuation of passengers, their luggage and non-essential crew. Fortunately conditions were not dire, the ship was not in peril and CCGS Pierre Radisson was near enough to be of assistance. That may not always be the case unless the CCG can increase its presence.

Update:
The fog cleared by the time the trio arrived off Quebec City later in the day August 27 where they conducted a "sail past"  off the Coast Guard Agency. CCG helo(s) filmed the arrival and there was considerable French language media coverage.