1. Swinging round on her anchor. 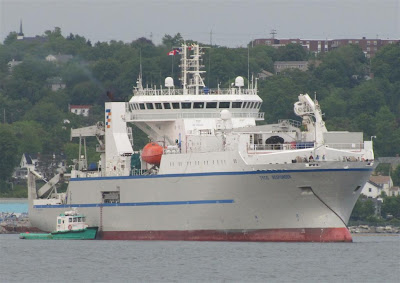 2. Dominion Diving's Halmar comes alongside with the boarding agent 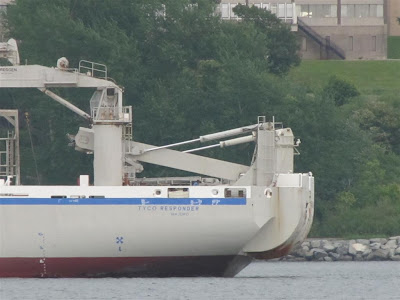 The distinctive looking Tyco Responder arrived at anchor this evening. Her last port was Baltimore, where she is usually stationed however the ship does work anywhere in the world that she may be needed, laying and repairing undersea communication cable. She is operated by the Tyco subsidiary Transoceanic Cable Ship Co LLC of Baltimore, but is regisatered in the Marshal Islands.
Tyco, the multi-national conglomerate with interests in security, telecom, electronics, healthcare and flow control, was in the news when its top executives were sentenced to jail for fraud. They looted the company of hundreds of millions of dollars, but unlike Enron, the other large corporate fraud case, Tyco has survived.
Built in 2001 for Tyco's ever expanding fibreoptic cable network, Tyco Responder is a highly specialized vessel. Unlike older cable ships, she works over the stern only, and has no sheaves on the bow.
As she anchored she swung around 180 degrees with her anchor cable working over her bulbous bow. That will be good for a few scrapes to be touched up next time the painters are over side.