After many quiet days in the port with mostly the regular container ships coming and going, there was a spike in activity today with three arrivals of note. 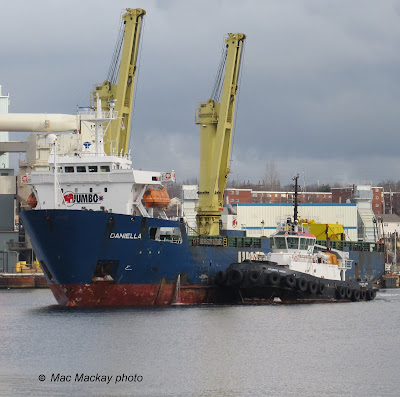 The heavy lift ship Daniella arrived to load boilers at Pier 9A. The ship was here in April when it loaded a power generation unit for Albany, NY. It was built in 1989 as Stellaprima but gave up that name in 1991 when a new Stellaprima was built.
It carries a 400 tonne crane and a 250 tonne crane and is operated by Jumboships of the Netherlands. 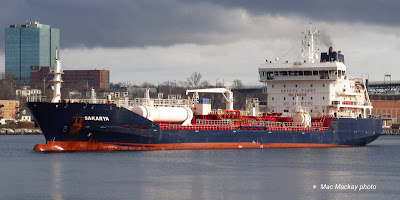 The Maltese flag tanker Sakaraya followed along soon after, tying up at pier 9. It has a cargo for Wilson's Fuels. An underground pipeline (newly refurbished) connects Pier 9 to tanks along Barrington Street. Built in 2008 in Turkey, it sails for Chemfleet of Istanbul. However its full width bridge, indicates a more northern trade, and its last port was Frederikstad, Denmark.

Third in was Reecon Emre, also Maltese flagged and owned in Turkey. The ship is under German management and is sailing for Nirint Line. It will unload a cargo of nickel sulfite at Pier 31. It was built in 2007, and can carry general cargoes, bulk cargoes and containers.