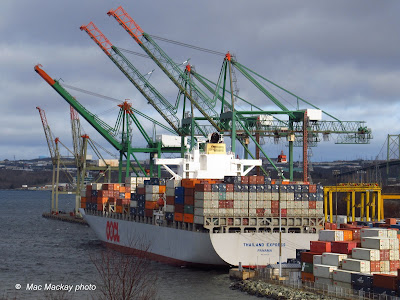 New Years Day is a "no work" day in the port of Halifax, but unusually this year, there was a ship tied up and ready for the end of the holiday.
Thailand Express (ex OOCL Seattle) arrived yesterday at Fairview Cove and is poised and ready for the resumption of work. Two ships are also anchored off the port. One, the autocarrier Pegasus Highway, was due to tie up at Autoport at 6 pm but as of 9 pm was still at anchor. The other, OOCL Shanghai, will wait until Thailand Express sails.

The work holidays for the port are dictated by the collective agreement between the labour unions and the Halifax Employers Association. Read more on their new web site:
http://halifaxemployers.com/
Although New Year's Day is not currently displayed, here are the rules for Christmas: