Add Archimdes to the list of superyachts that have visited Halifax. This 1,100 gross ton behemoth was built in 2008 in the Netherlands  to a Feadship design and measures a cool 67.75 meters overall length. Its two Caterpillar engines move it along at a stately 16 knots.
The yacht left Newport, RI on July 20 and made a stopover in Port Jefferson, NY before arriving here yesterday afternoon, just after completion of the Tall Ships Parade of Sail. It left at noon time today giving Gros Morne, NL as its destination.
There are lots of better photos and more detailed descriptions elsewhere on the internet. 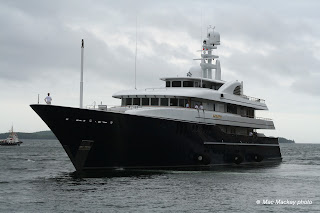 1. Archimedes gets away from the dock. 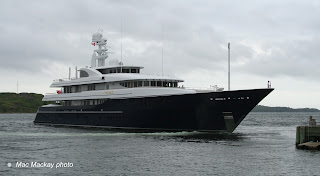 2. Using its twin screws and powerful bow thruster, the ship makes a quick 360 to head out.
Posted by Mac at 5:02 PM