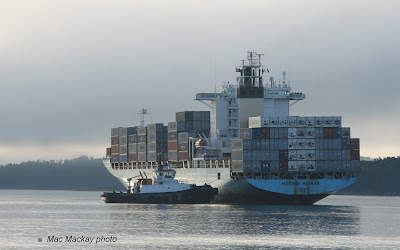 1. Maersk Patras arriving this morning from the St.Lawrence River.

In a ruling delivered on July 18 the Canadian Transportation Agency has again declined Maersk Line Canada's request to transport 200 empty containers from Montreal to Halifax on the Maersk Penang (a foreign flag ship). The Agency's finding was that the transfer falls within the definition of coastal trade and that suitable Canadian ships are available for the work.
Nunavut Eastern Arctic Shipping Inc offered the two ships Avataq and Umiavut, which were found by the Agency to be suitable.
Maersk has been trying to get the boxes to Halifax by sea on their own ships for some time, with no luck. CN Rail has a program to deliver empties to Halifax by booking their own cargo in the boxes (essentially renting them to defray haulage costs) and other shipping companies offered ships last year, so it would appear that Maersk is stymied.
With decreasing water levels on the St.Lawrence seeing more traffic diverted to Halifax, Mersk is in a tough spot. It does not have space on its ships to take the empties back to Europe and it needs them in Halifax.
On the other hand Zim has opted to add a ship a week to Halifax as mentioned previously. This week's arrival was the Zim Tarragona a Liberian flag vessel built in China in 2010, operated by Rickmers, with a capacity of 4256 TEU. It is also carrying essentially transatlantic traffic inbound, which will certainly boost Halifax's recently declining container numbers. 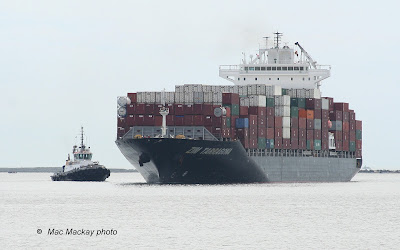 2. Zim Tarragona arriving on Thursday.
Posted by Mac at 7:34 PM