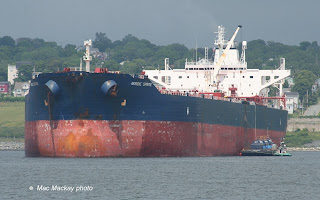 Although it looked puny in comparison to DS Crown [see subsequent and previous postings] the tanker Nordic Sprite is still no sprite! It arrived yesterday at Imperial Oil to pump off slops after tank washing (It unloaded earlier in the week).
It then moved to anchor to pump off some more noxious material into a barge with the tug Roseway alongside.
Built in 1999 as Seasprite by Samsung Heavy Industries, Geoje yard, it measures 80,688 gross tons, 147,188 deadweight. Nordic American Tankers has operated since 2009 under it present name. It is enrolled under the Norwegian International Register, and lists Sandefjord as its port of registry.
Nordic American operated the shuttle tanker and storage tanker for the old Panuke oil field when it was still in service, and so the funnel markings on this ship are familiar in Halifax. It may also have called as Seasprite-the name rings a bell. 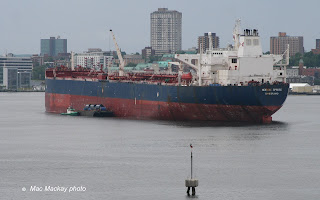 The ship sailed this afternoon for West Africa.
Posted by Mac at 8:22 PM