USS Scranton a Los Angeles class attack submarine (pennant number SSN 756) sailed from Shearwater this afternoon after a five day port visit. One of 46 subs of her class, she was laid down at Newport News in 1986, launched in 1989 and commissioned in 1991.
Subs of this class are rated for 33 knots dived, and can carry a variety of weapons. In March 2011 this particular boat launched cruise missiles into Libya as part of the NATO lead operations.
It sails with a crew of 133, almost none of whom were visible on the tiny bridge located atop the sail. A harbour pilot and one of two others were all that were visible from my vantage point. 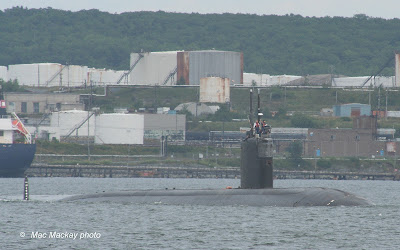 1. Making the turn around Ives Knoll.

2. Close escort was provided by a patrol boat and a team of divers.

3. Ther tug Glenbrook also accompanied the boat on its outbound course.
Posted by Mac at 5:20 PM