Although Canada and the United States of America can't agree on who actually won the war of 1812-14, they have agreed that it is worth celebrating, so have assembled three naval vessels to  make a two month long trek from Halifax through the Great Lakes. Many important battles of the war took place in that region, and so it is fitting that remembrances take place there.
The three ships are HMCS Ville de Quebec, a Halifax class frigate that appears to have been re-armed to a certain extent.
USS DeWert an Oliver Hazard Perry class frigate commissioned in 1983 (and built at Bath, Maine)
USS Hurricane a Cyclone class coastal patrol vessel, comissioned in 1993.
The three left Halifax this morning, each in turn unfurling a huge national flag as they got underway. 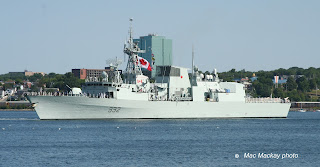 1. Ville de Quebec has backed out into the harbour and started to turn for sea.

2. DeWert is clear and the tugs are casting off. 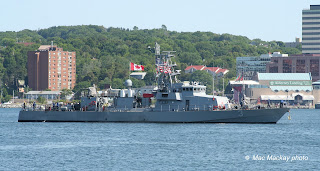 3. Hurricane brings up the rear. The large Canadian flag showing amidships is actually on the Dartmouth shore, and not on the ship itself.

This was not the only naval activity in Halifax this morning, The French tug Malabar also sailed- see Tugfax for that one.