1. Atlantic Cartier lines up for the MacKay bridge as it heads for sea this evening.

The veteran ConRo ship Atlantic Cartier returned to Halifax today after a fire in Hamburg on May 1 put the ship out of commission for a time. The fire, on the ship's car deck, destroyed many cars, and because it was fought with water and foam, damaged electrical and other ship's services, which had to be replaced. It is thought that had the ship's CO2 system been used, the fire could have been smothered with less damage.
External cooling by fire tugs apparently limited structural damage. Also, heroic efforts by longshoremen to unload containers from the deck during the fire, meant that several hazardous cargoes, such as explosives and ammunition, were removed before the fire (or heat) could reach them.

The ship sailed this evening for New York. 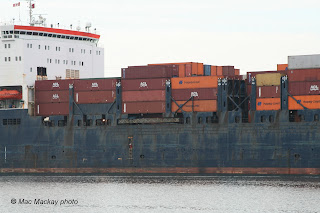 2. A crew member rigs the pilot ladder amidst huge rusty streaks on the ship's side. These are the reminders of the vast amounts of water thrown at the ship during the fire, which then washed over the decks.

3. Atlantic Oak works as stern escort as the ship lines up for the Macdonald bridge-the second of two bridges it must pass.