National Gypsum - on the upswing

1. Pioneer glides into Halifax this morning, as the fog begins to burn off.

Despite my dark prediction the other day*, it appears that National Gypsum is experiencing an upswing in business. In fact the company has assured me that there are no plans to close the Milford Station Quarry. Other observers have noted that there are now daily trains from the quarry to the Burnside storage area and loading pier.
Today's arrival of Pioneer is its third arrival this month, and with Atlantic Huron's one trip that makes better than one load a week in July alone. That means that the US construction industry is improving, and there is more demand for the mineral, which is most prolific in Nova Scotia. 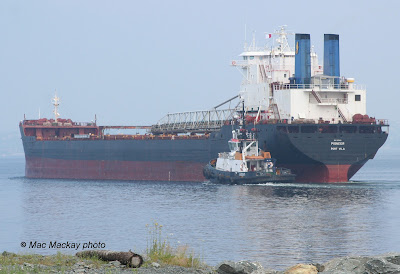 2. Atlantic Willow comes up alongside Pioneer to assist in turning the ship to go stern in at National Gypsum.

Although built on the Great Lakes by Port Weller Dry Dock  in 1981, as Canadian Pioneer, the ship has sailed under the Vanuatu flag since 1988 as Pioneer, and has now become the most frequent caller at National Gypsum.

* My July 12 posting has since been revised.