The official inauguration ceremony for CMA CGM's new service to Halifax took place at Halterm today. The CMA CGM Melisande arrived yesterday and after completing its work moved around to pier 36 for the event. Marquis tents were set up and tours arranged for dignitaries, many of whom would be in town for Port Days which starts later this week.

The ship, measuring 90,500 grt and 101,387 dwt was built in 2011 by Shanghai Jiangnan Changxing Heavy Industries for Danaos Shipping of Athens on long term charter to CMA CGM. It has a capacity of 8530 TEU (including 700 reefers). 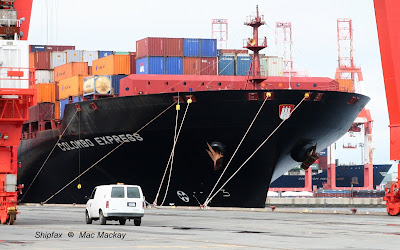 If that was not enough, Halterm also hosted a Hapag-Lloyd ship today. H-L ships normally go to Fairview Cove, but that terminal's big cranes were working NYK Meteor. Halterm's big cranes were needed to work the even larger Colombo Express a  93,750 grt 103,800 dwt ship with a capacity of 8749 TEU (including 730 reefers). It dates from 2005 when it was built by Hyundai Heavy Industries, Ulsan for direct ownership by Hapag-Lloyd.

The trend toward larger ships coming in Halifax is due in part to the trickle down theory. As larger and larger ships enter the Asia-Europe trade, they are displacing ships of 6,000 to 10,000 TEU. Lines are shedding smaller ships to reduce the cost per box to carry containers.A reduction in cargoes from China is accelerating this trend as lines fight for market share.