A rare sight in Halifax is two cruise ships meeting each other. This evening that event took place as the departing Celebrity Summit met the inbound Caribbean Princess. 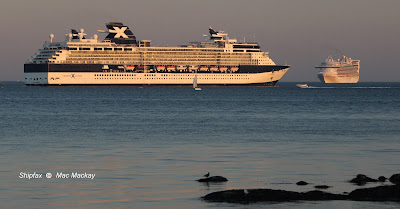 After several bursts of 5 warning blasts to clear pleasure craft out of the way, Celebrity Summit takes the western channel to give lots of room for the inbound Caribbean Princess. The Oceanex Sanderling also followed close behind the Summit.

Normally cruise ships arrive in the morning and sail in the late afternoon or early evening. Caribbean Princess's late day arrival means an overnighter in Halifax for its passengers and crew.
A no show today was Aidadiva originally scheduled on its run from Reykjavik and St. John's to New York.
Posted by Mac at 9:24 PM