Marco Polo outclassed the other two cruise ships in Halifax today (Veendam and Carnival Splendour) not only with its classic good looks, but also with its unique history. 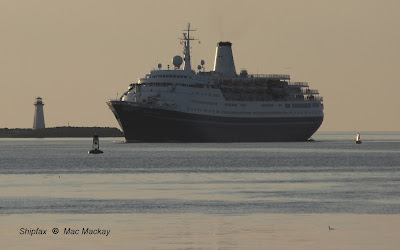 It was built in 1965 by the Mathis-Thesen yard in Wismar (which was in East Germany at the time) for the Baltic Steamship Company of the USSR as Aleksandr Pushkin, one of five sister ships. They were built for liner and cruising service, but could also do double duty as troop ships and as such had large cargo capacity and other non-typical features such as multi-berth cabins, and facilities for 500 deck passengers.

On April 13, 1966 it entered North Atlantic liner service running from Leningrad, via Finland and England to Montreal. With the upcoming Expo 67 world's fair in Montreal, and the USSR's imposing pavilion, the ship drew considerable publicity for the motherland, which was as much a goal of its operators as commercial success at first. The Russian-American Line had ceased service in 1917, and this was the first USSR liner on the North Atlantic.(The service was seasonal, with cruising in the winter.) It eventually became the last transatlantic liner on the St.Lawrence River and a sentimental favourite.  In later years it made more cruises including North Sydney and St-Pierre et Miquelon.

The ship was also much admired by shipwatchers for its good looks, as compared to the Cunarders and CP Empresses, which it outlasted. 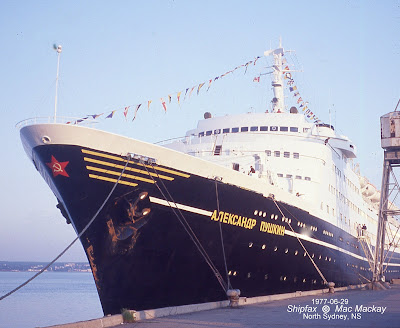 The ship was sold in 1991 and over two years was extensively rebuilt in Greece. Its higher funnel and extended passenger decks (occupying former cargo holds) did not improve the ship's looks in my mind, but the total refurbishing of its accommodation ensured that it would have an extended life as a popular cruise ship. 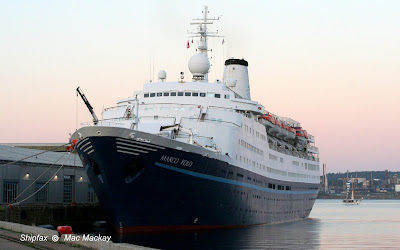 Readying to sail this evening at dusk, the ship is still stylish. 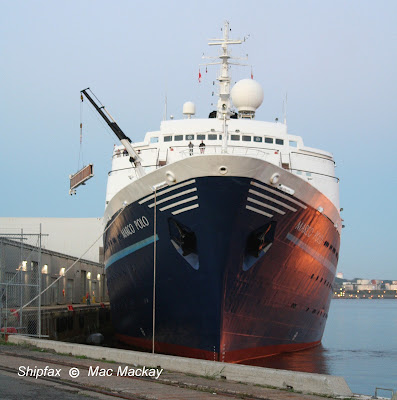 Lifting off a gangway section, the ship is almost cast off and ready to sail, but the sun was gone when it came clear.