Halifax and Hamburg, and weekend catch up

At the recent Port Days event in Halifax, much was made of the similarity between the ports of Halifax and Hamburg. In fact one of the keynote speakers at the event was the president of the Port of Hamburg. He emphasized that in addition to meeting the needs of  Hamburg itself, the port of Hamburg serves a vast "hinterland" of north and central Europe. Because the Alps block easy access to much of northern Europe to Mediterranean ports, Hamburg is a much more efficient gateway to those areas.

Similarly Halifax is positioned to serve the "hinterland" of (geographical) mid-America, bypassing the congestion of ports such as New York and even west coast ports. To bolster this point an executive of Loblaws, a massive food and retail conglomerate, said that his corporation has shifted some of its shipping through Halifax instead of the west coast ports. As an importer of myriad products from Asia, it found that the dependability of west coast ports did not meet its needs.

As if to support the Hamburg connection, today two ships bearing the name of that important port visited Halifax.

First in was the small German cruise ship Hamburg. After a season of touring the Great Lakes it is now repositioning. Built in 1997 as c. Columbus (yes the first "c", for Christopher,  was small), the ship sailed for Hapag-Lloyd until 2012, also visiting the Great Lakes with stops in Halifax. 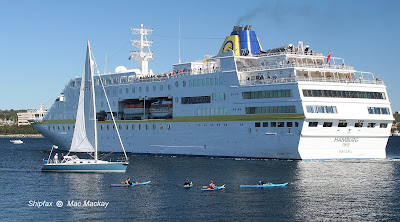 ...and threads the needle between numerous pleasure craft, some of whom remain oblivious to the consequences of getting in the way of a ship. (The motor boat off the bow did not change course or move off. The ship gave a whistle warning that it was turning to starboard, but the motorboat operator would have no idea how tight a turn the ship could make.) The kayakers and sailboat kept a respectful distance.

With a capacity of 420 passengers, it provides a very different kind of cruising experience, catering mostly to Germans.

Later in the afternoon OOCL Hamburg arrived and tied up at Halterm, berth 41.

Note how light the ship is laden, despite having a lot of containers on deck. Most of those are empty.

The ship called here September 15 on its westbound leg (with import cargo) and went on to discharge at US ports. It is now on its eastbound, return leg to Asia. The woeful trade imbalance to that part of the world is evident by the ship's light draft. That draft is the reason the ship called at Halterm, because it would not have clearance under the bridges at higher tides. (We are having extra low tides this week, so it might have made it today). 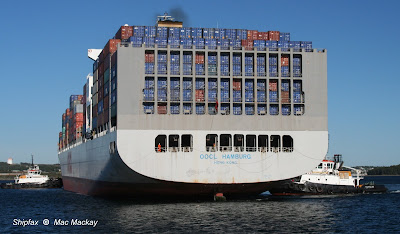 The stern portion of the ship is loaded to the top with empties, and looks like an old time punchboard.

The ship has little connection with Hamburg, except to recognize the name of that port. It was built in Korea and is owned and registered in Hong Kong. At 80673 TEU (1400 reefers) it is among the larger container ships to call in Halifax, although it will soon be eclipsed by 10,000 TEU vessels. 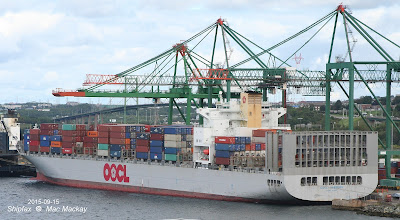 On its westbond visit, September 15, the ship was still deeply laden despite unloading many boxes at Fairview Cove.

Catching up with some other weekend activities in Halifax::

Perhaps to confirm some claims that Halifax is not the end of the world, but you can see it from here, we did see the "end of The World " on Friday. That is, we saw the end of an overnight visit from the residence ship The World. Built in 2002, it was a unique concept, wherein, like condos ashore, its suites (and the entire ship) is owned by the residents. There are 165 residences, and on average 150 to 200 people are on board at any time. There is a crew of 260.
The ship has visited Halifax several times, including in its first year of operation, and on October 5, 2012, after completing its record breaking Northwest Passage from Nome, AK, to Nuuk, Greenland. It was the largest passenger ship to have done so. It returned to Halifax on October 28 of the same year on an unscheduled call when it was diverted by Hurricane Sandy. 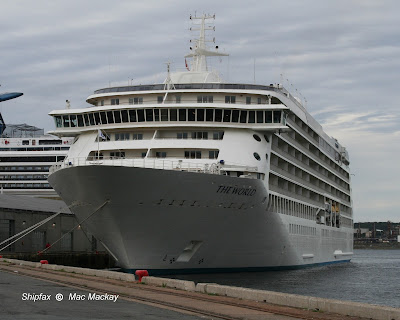 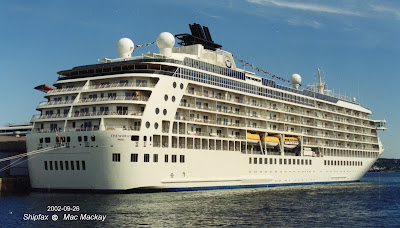 For those more interested in ordinary merchant ships, there was another visitor for bunkers on Friday. The Panama flag United Harmony, although a conventional bulker of 24,328 grt, 38,994 dwt, with four 30 tonne cranes, it is something new for its owners.

United Harmony airs it holds as it takes bunkers on a windy Friday afternoon.

The improbably named Hiong Guan Navegaçeon Co Ltd of Hong Kong, provides ships to the better known Dowa Line America Co Ltd, Englewood Cliffs, NJ, and carrying the Balsa and Century names. Previously specializing in small bulkers of under 10,000 dwt, its ships trade mostly in eastern North America and the Caribbean. This ship is much larger, and was delivered earlier this year by Shin Kurushima, Toyohashi, Japan. The bulker market is in the doldrums, but Dowa Line has carved a niche for itself. The ship sailed for Port Cartier, likely to load grain.