The autocarrier Glovis Century returned to Halifax yesterday and today reloaded its cargo of automobiles.
The ship called here on September 20 and discharged a thousand or so North American export cars to reduce its draft for the St.Lawrence River. The  Chrysler and Ford automobiles remained on pier 9C while the ship went on to Montreal and loaded a military cargo. 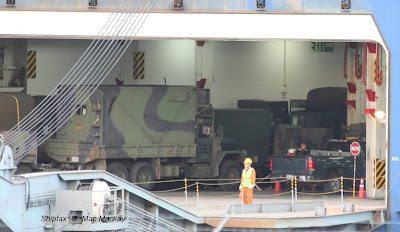 Some of that cargo was visible on the ship's main deck which is higher than the upper and lower car decks. 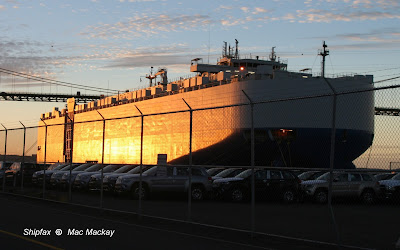 Last evening at sunset, the ship was secured but did not begin loading until today. with some of the loading completed. I suppose so that some of the vehicles on board could be shuffled around. By the same token, Work was completed by supper time today, but the ship was not scheduled to sail until 2130, allowing time for more shuffling within the ship and final lashing. It takes much longer to load these ships carefully than it does to drive the cars off. 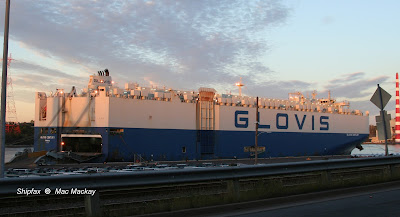