No encore at this concert

Another ACL ship has gone to the breakers.Atlantic Concert arrived off Alang, India September 15 and  was beached two days later. Scrapping likely began immediately. Its fleet mate Atlantic Companion was the first to go in September 2015, followed by Atlantic Compass in June 2016. 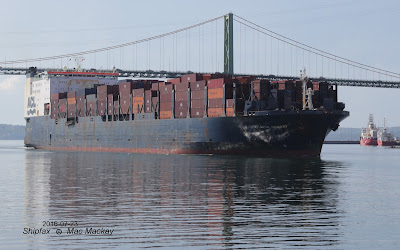 The last time I saw the Atlantic Concert, it was sailing from Halifax July 23, 2016 for the last time and it was certainly obvious that no investment was being made in the ship except to keep it running long enough to get through its last few weeks of service.

The first time I saw the ship it was brand new, in June of 1984. Fresh out of the Kockums AB shipyard in Malmo, Sweden it measured 25,435 grt / 36,500 dwt with a capacity of 2157 TEU and a huge RoRo capacity served by a massive stern ramp, it dwarfed most other ships calling in Halifax.
I was a less prolific photographer then, so it was not until August that I finally got a picture. 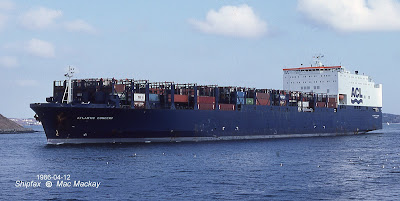 The ship was then owned by Wallenius Lines, an original partner in ACL, and remained under their ownership when ACL began a joint service with HAPAG-Lloyd to Montreal in 1987. The ship was renamed Concert Express and sent to Hyundai Mipo to be lengthened 42m thus increasing tonnages to 57,255 grt / 44,988 dwt (later reported as 51,648) and container capacity to 2908. Its overall length was then 292.01m ( 958 ft). 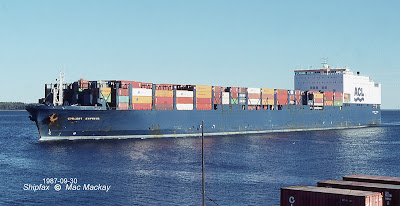 Concert Express in 1989.
(as seen from the bridge of the tug Point Halifax and through tinted glass)

In 1990 Atlantic Container Line AB was formed in Sweden to own the ACL ships with Grimaladi Group as the owner and managers. In 1994 the ship reverted to its original name again and has been a predictable presence in Halifax ever since. With five G3 class near-sisters, ACLs were the most readily identifiable ships in  Halifax and that is why I chose one for the mast head photo (Atlantic Compass taken November 23, 2014). 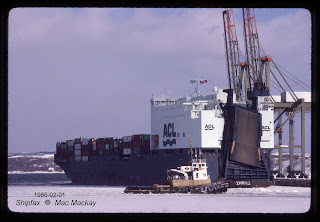 Atlantic Concert docks at Fairview Cove Febraury 1, 1986, as the tug Point Vibert stands by to flush broken ice away from the dock.
(Bedford Basin rarely freezes over, but ice does form or is blown into Fairview Cove.)


The two remaining G3 ships, Atlantic Conveyor and Atlantic Cartier will also be heading to India as the next G4 class ships come into service.

With the new ships ACL is expanding its capacity considerably and has expressed concern about the recent talk of moving Fairview traffic to Halterm and resultant delays in rail loadings. If Halifax cannot compete with New York for delivery of mid-west traffic, we may see the last of ACL ships.