Picking up - more or less- where we left off

Shipfax resumes its posts now that staff vacations are completed. It will still cover activities in Halifax Harbour - and elsewhere - but perhaps not with quite the the breathless urgency of before. We will see.

It seems like a good time to resume as Queen Mary 2 made another of its visits to Halifax - its third of four scheduled this year. 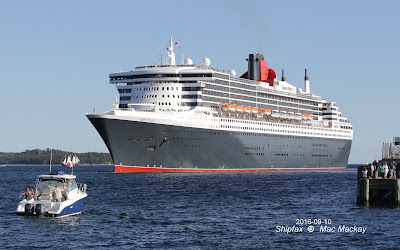 Always a draw for  onlookers, the waterfront was lined with visitors and residents as the ship got away this afternoon. The ship looks quite splendid now that its hull has been repainted and is still an impressive sight even if it is not the biggest ship to call here.


The holder of that title was the monster Anthem of the Seas, September 1. It is due back twice this month and in October. I may dare to take a picture then.

The cruise season seems to be going well, with only one cancellation so far. HAL's Zuiderdam passed up its September 5 visit and arrived in New York a day early to avoid Tropical Storm Hermine that was lingering over Cape Cod and possibly heading north. It is due again tomorrow.

Also in port was a substantial naval presence with USS Robert E. Peary, Bulkely, Gonzalez, Toledo, HMS Monmouth, FS Languedoc and ESPS Patino (for the RCN) all in port for the weekend after NATO exercises.

The handsome Arleigh Burke class Bulkely (DDG 84) and Gonzalez (DDG 66) against the backdrop of the hulking Robert E. Peary tied up at Jetty Bravo.

The ships are due to sail on Monday, which unfortunately Shipfax will not be able to cover due to conflicting assignments.