After nearly two years under the axe, it finally fell on September 2 when a DND memo revealed that in fact CNAV Quest will be decommissioned. Its civilian crew were notified at the same time. The navy's only research ship, built for hydrographic and other research missions, (and able to work in the arctic) will be "gone" by the end of the year and perhaps the employees too. 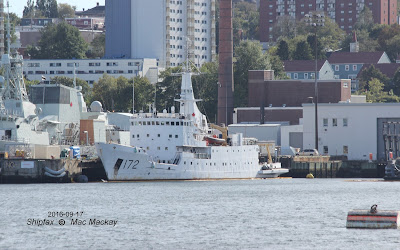 Quest at her November Golf jetty, HMC Dockyard.
As covered here in February 2014 the RCN docked the ship until the end of the 2013-2014 budget year to slash costs. However there was no money to run it in subsequent years and it has been idle ever since.
Although no date has been announced it is expected that the official decommissioning will take place before the end of 2016 - likely without ceremony- and the ship will be prepared for disposal. At the rate government ships are actually sold it may be years sitting around the harbour until such time as a sale actually takes place.

Quest was modified several times over the years to increase research space and to perform certain tasks. None of these alterations improved the ship's appearance. And of course there was the unforgivable lack of buff paint on the funnel.

In any even here are some photos of the ship in better times. 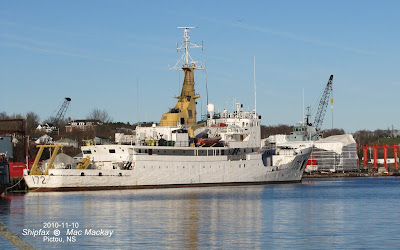 In Pictou, NS awaiting drydocking, Quest shows off her good side, before the hull sponsons were added in 2012. 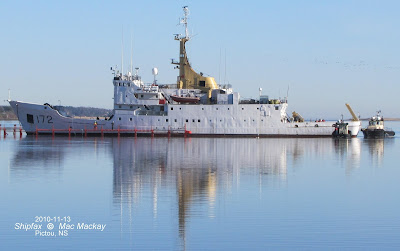 The ship's port alley was partially plated over in her 1997-1999 mid-life refit. The work could have been done a bit more gracefully and saved the ship's deck line.

Before that the ship had a more appropriate, yacht-like appearance: 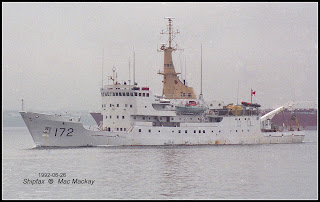 Sailing into Halifax in 1992, in its more or less original appearance, the ship looked quite interesting. Its enclosed crows nest in the funnel structure gave it a distinctive profile.

Launched by Burrard Dry Dock in North Vancouver July 9, 1968, Quest was commissioned August 21, 1969. A diesel electric ship, it has two 10 cylinder Fairbanks Morse engines (1775 bhp) driving two GE electric motors (1450 shp) on twin screws. It had a mid-life refit in 1997-1999 and extensive modifications in 1999. It was tied up again in 2009 to correct stability and deck subdivision issues outstanding since 1986 and unaccountably never dealt with in previous refits. It also had some engine problems in 2009 leading up to the 2010 drydocking pictured above.
In 2011 it was fitted out for Radar Infrared Electro-Magnetic Pressure Acoustic Signature [RIMPASSE] experiments and crossed the Atlantic to work with the German and Dutch navies.  At that time it was painted navy grey on one side only and fitted with side curtains and hull cooling.
In 2012 it reverted to its old self and conducted research in the arctic. Its only since that time that it has had the white funnel.
It is also to be noted that it is the last white ship in Canadian government service. We will soon only have CSS Acadia to remind us of the days when hydrographic ships were white!

Footnote: CCGS Matthew, formerly white also, was laid up in 2012 and renamed 2015-03 prior to disposal. It was offered for sale for $2.25 mn, but there were no takers on August 7. It was re-posted for sale for $1.9mn and that sale closed September 7.