Another four ship cruise day in Halifax had every bus with four round wheels on the waterfront to carry passengers to the surrounding sights Celebrity Summit and Serenade of the Seas lined the seawall from pier 20 to 22. Disney Magic was stern in at pier 31 and the smaller Azamara Journey tucked in at pier 23.
Ships are staying in port longer into the evening now and often leave after dark. They usually arrive in darkness of early light, so picture taking is a challenge.
I did manage to get some nice light on the Serenade when she sailed. 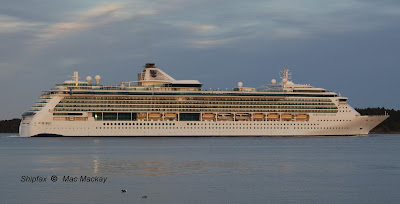 The 90,000 tonner (2,490 passengers) is not considered a large ship now, but when she came out of Meyer Werft in July 2003 she was the largest ship ever built in Germany. Royal Caribbean arranged for her August christening in New York by no less than Whoopi Goldberg. This was the ship's fourth of a schedule eight calls this year. (In 2003, its first year, it made twelve calls, including one storm induced over-nighter). 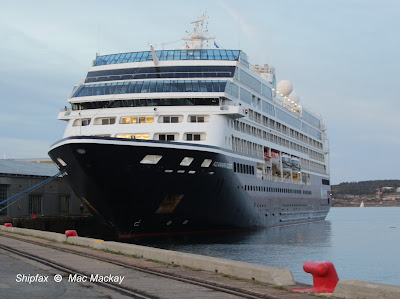 Royal Caribbean also had Azamara Quest in port, one of its exclusive small ships, at 30,277 grt and 702 passengers. Built in 2000 as R Seven for Renaissance it became Delphin Renaissance in 2003, and Blue Moon in 2006. It took its present name in 2007. I don't recall this ship ever calling in Halifax before. 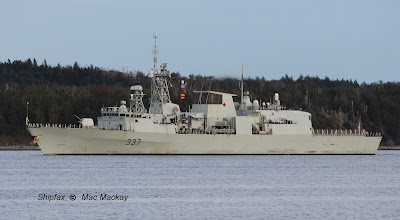 Regular harbour activity included the arrival of the hardworking HMCS Fredericton. After a stint in Operation Reassurance in the Mediterranean from December 30, 2015 to July 5 of this year, the ship is now returning from operation Cutlass Fury with NATO ships off our coast.

The departure of the still shiny Oceanex Sanderling, was marred somewhat by all that unhealthy looking smoke. Although nothing has been announced, Oceanex must be planning on replacing the 39 year old veteran. 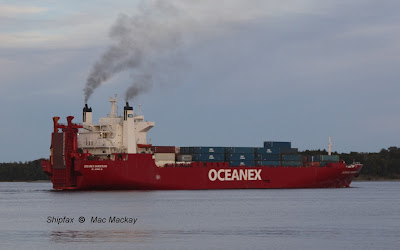 Built by Sasebo Heavy Industries in 1977 as Ravenfels for the lamented DDG Hansa, it became Essen in 1980, Kongsfjord in 1981 and Onno in 1983. In 1987 it became ASL Sanderling and has plowed its furrow between Halifax and Newfoundland - often bi-weekly ever since. When Atlantic Searoute morphed into Oceanex it kept up the same routine and was renamed in 2008. It has had some major refits over the years including at least one serious engine rebuild, but time must be catching up on the ship.
Its most recent three month re-do in Gibraltar completed in June of this year will certainly keep it going for a another few years.