Many of the product tankers that callls in Halifax show up once and never again as they go about their bueinsss around the world. Some become more or less familiar faces, making several calls. Such is  Energy Patriot, with its third calll in Halifax this year arriving at anchor this morning. 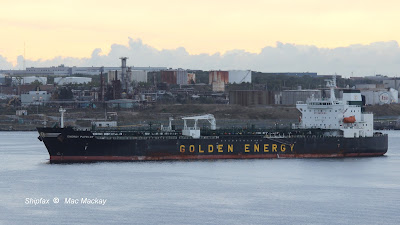 The 29,605 grt, 46,606 dwt ship was built in 2008 by Sundong shipyard in Tongyeong, South Korea. It is operated under the Isle of Man flag by Golden Energy Ship Management of Athens, Greece. After spending the morning at anchor it moved to Imperial Oil this afternoon.

Unfortunately the rain moved in at about the same time, marring the view of a much larger tanker arriving at number 1 anchorage.

Umlma flies the Qatar flag for owners Qatar Shipping Co SPC of Doha. It datres from 2006 when it was delivered by Hyundai's Samho yard in South Korea. The 57,243 grt, 106,005 dwt ship had discharged crude to Irving Oil at Canaport, Saint John and stopped in Halifax long enuough to take on bunkers before sailing for Whiffen Head, NL to take on some Hibernia crude.

Irving Oil has applied to use the tanker to make one trip from Whiffen Head to Canaport between October 18 and November 3 with 700,000 bbl of White Rose crude.