The Tao Hua Hai anchored in Halifax briefly today en route from Sept-Iles, QC with a load of iron ore.

The ship was built in 2012 by Shanghai Jiangnan Changxing shipyard and flies the flag of the Peoples Republic of China for COSCO Bulk. As far as I can determine its name means "Peach Blossom Sea". 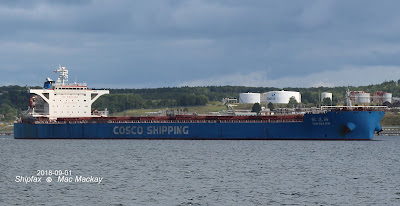 The ship's blue hull colour is fairly recent - most on line photos show it in black, with no banner letters.
Its next call is to be Corpus Christi, TX - site of a new iron reduction plant that opened last  year. The plant, owned by Voestalpine of Austria, makes purified iron primarily for European car makers Mercedes and BMW, but also sells its output (also known as sponge iron or hot-briquetted iron) around the world as a pre-product for high quality steel making. Corpus Christi was chosen as the site due to its very low energy costs compared to Europe.