Since returning from Quebec after Labour Day I have not been attending to events in the port of Halifax but instead I have had to focus on personal health matters. Regrettably this has reduced my mobility and access to the harbour. All this is to say that Shipfax has had to take a back seat, and may have to do so for some time to come.

I missed the onslaught of Hurricane Dorian which resulted in a mass exodus of NATO warships from Halifax to various anchorages such as Mahone Bay, St.Margarets Bay and even the Bay of Fundy where the Canadian Asterix stood by until the storm passed.

Today was the first opportunity I have had to watch the harbour, but where there was no commercial activity. However there was one arrival, and that was the Royal Canadian Navy's sail training vessel HMCS Oriole. 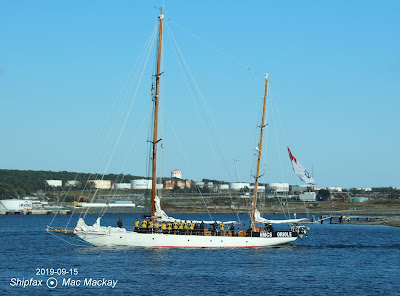 The smallest vessel in the Canadian navy was returning from a summer on the Great Lakes.

Meanwhile in Number One anchorage the largest ship in the Royal Navy was spending its last full day in Halifax after a four day port call.

At 65,000 tonnes displacement it is a very big ship, except when compared to the massive US 100,000 tonners. With the distinctive "ski jump" flight deck that accommodates larger and heavier aircraft, the ship at least so far, can carry helicopters, STOVL (short take off and vertical landing) aircraft and F-35B Lightning jets. The ship was commissioned in December 2017, after the RN was without aircraft carriers for several years. A sister ship Prince of Wales, may start sea trials before the end of this year.

The ship is due to sail tomorrow morning.

I do expect Shipfax  to return to normal eventually, but postings may be intermittent for a time.