View from on high

To show a visitor from Vancouver the ideal ship photo spots in Halifax, we took walk out along the Angus L. Macdonald Bridge this afternoon. After all, they have the Lion's Gate bridge, a tremendous ship watching vantage point too, but we are not to be outdone in Halifax

In addition to a bird's eye view of HMC Dockyard, the Macdonald Bridge gives a great view of ships bound for Bedford Basin, particularly in the afternoon sun.

Only one ship fit that qualification today, and that was Gerhard Schulte (Hong Kong flag) arriving from Norfolk for Atlantic Container Line. That company's normal five ship roster of giant ConRos has been disrupted since April when Atlantic Sail was removed from service for repairs in Hamburg. Using some substitute vessels with RoRo capability from ACL's parent  Grimaldi Group, the line had to look elsewhere for container capacity to meet is weekly schedule. 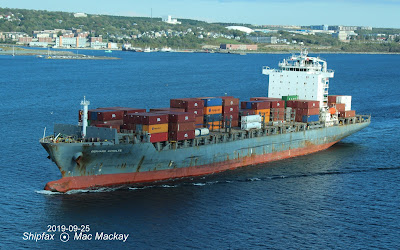 Built in 2006 by Shanghai Changxi shipyard, the 35,091 gt, 42,083 dwt Gerhard Schulte was chartered in from the Bernhard Schulte fleet. The 3534 TEU (including 500 reefer plugs) ship carried the name APL Bangkok from shortly after launch until 2014. After an eight hour turn around at Ceres, Fairview Cove the ship will head for Liverpool late this evening.

Not to miss other traffic from the bridge (see Tugfax) I was able to get a view of RMI Marine's Speculator. Now a dive tender and general workboat, it was built by Bateaux de Mer Ltee in Cocagne, NB for the Department of Fisheries and Oceans as Arcadie. When it was declared surplus 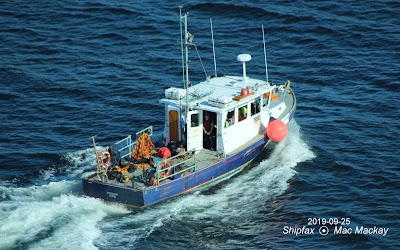 it was renamed 2005-02. It was acquired some time ago by RMI Marine and now appears to have taken over at least some of the duties of Captain Jim.  That boat sank with tragic consequences earlier this year. See: http://shipfax.blogspot.com/2019/01/search-operation-underway.html