The cruise season is at its peak in Halifax and looks to be on track for another record year. Yesterday there were five ships in port and today there were four.
Of today's callers, the two big ships, Norwegian Escape (165,157 GT, 325.9m long) and Celebrity Summit (90,940 gt, 294m long) tied up tail to tail at the seawall, piers 20 to 22.  That seawall, designed a hundred years ago to take the largest ships of the day is 611m long ( 2170 feet) but even that was not long enough for today's monster ships and their mooring lines.
Celebrity Summit's bow overhung the end of pier 20 and its headlines were stretched out to the Tall Ships Quay. That wharf is only timber pile construction but a special bollard was set in a concrete structure a few years ago to accommodate this situation. It would be interesting to see the "letting go" process when the ship sails this evening. 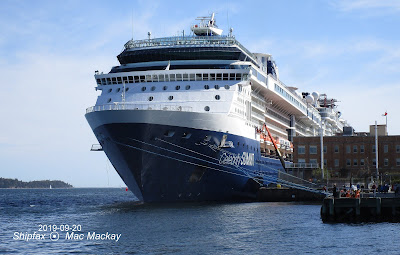 The two smaller ships in port today are the first time caller RCGS Resolute and Scenic Eclipse. The latter called September 5 for the first time after making its debut on the St.Lawrence River last month. 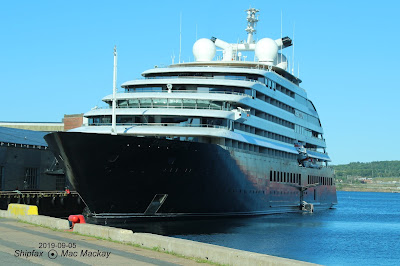 Completed this year (a year late) by Uljanik in Pula, Croatia, the 17,545 gt ship is marketed as six-star and the first "discovery yacht". With a passenger capacity of only 228 (plus 172 crew) it features numerous Zodiacs, two helicopters, a seven person submarine and other amenities to give the feel of a "billionaires yacht."
Scenic Tours Australia has a sister ship on order to be delivered next year.

I hope to cover RCGS Resolute in a future post.