Every cloud has a silver lining, so perhaps that is where Silverseas Cruises Ltd got the name for Silver Cloud. There was scarcely a cloud to be seen in over Halifax as passengers disembarked this morning for an extended day in port.The ship is not due to sail until 2200 hrs. Passengers on the nearby Zaandam and Norwegian Dawn will have to be contented with 1800 and 1830 hrs departures for their ships. 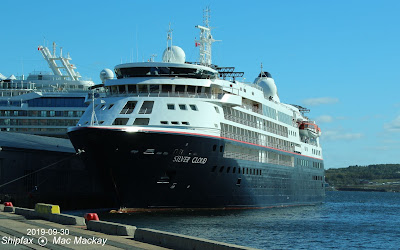 The 254 passenger Silver Cloud dates from 1994 when its hull was built by Visintini, Porto Viro and superstructure completed by T.Mariotti in Genoa. Then measuring 16,927 gt, it was a conventional luxury cruise ship. However extensive rebuilds in 2012 and 2017 upped the tonnage to 17,014 and upgraded the ship to ice class, making it "the most spacious and comfortable ice class vessel in expediiton cruising" according to Silverseas. The ship is equipped with no less than eighteen Zodiacs and ten kayaks to allow its guests to savour the northern regions including "cavorting penguins" [Silverseas words]. A large crew of 212 cater to every need, while passenger capacity is reduced to 200 for polar cruises.

The ship and its sister Silver Whisper were originally painted all white, so perhaps the blue paint was added after the 2017 refit to improve visibility in ice and snow.

Next year fleetmate Silverseas Explorer will reprise this year's first Northeast Passage while Silver Cloud will do a Northwest Passage at the same time.