The pure car and truck carrier (PCTC) Taipan sailed this afternoon  for New York. Although bearing the colours of Wilhelm Wilhelmsen, the ship is not owned by Wilhelmsen nor Wallenius (the other partner in the line). 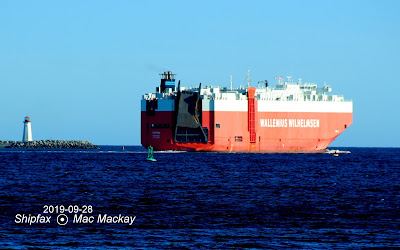 Built in 2006 by Stozcnia Gdynia in Poland the 57,692 grt, 21,021 dwt ship was launched as Morning Countess for Ray Car Carriers. It was renamed Taipan on delivery when it entered into a long term charter with Wilhelmsen.
The Bahamas flag ship has a reported capacity of 6700 CEUS (Car Equivalent Units).

Car carriers and RoRos have been much in the news of late after a series of fires and sinkings. The most recent involves Golden Ray which capsized September 9 while passing another car carrier on leaving Brunswick, Georgia. Rescuers miraculously retrieved four crew members after they were trapped in the ship for thirty hours. The workers had to cut a hole in the hull to release the four.
A massive response effort has been mobilized to remove fuel from the ship, but a salvage survey has been delayed until conditions are deemed safe.

There have been ballasting issues with car carriers, notably Cougar Ace in 2006, but is too early say exactly what happened with Golden Ray. Donjon Smit have been appointed salvors.