On Friday the tugs Oshawa (pulling) and J.F.Whelan (pushing) moved the crane barge Derrick No.4 from pier 42 Halterm to pier 9C.

This move left the new pier extension clear of any construction equipment and left an unobstructed view.

McNally Construction has completed building the concrete cribs for the project. Work remaining includes building up the cope walls to the level of the existing pier before the new working surface, crane rails, etc., can be installed. It appears that one or two cribs remain to be positioned. 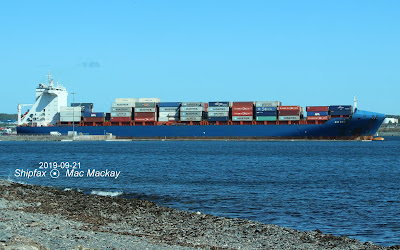 As the 220m long  EM Kea sailed this afternoon, it gave the new work a sense of scale. EM Kea is a regular caller on the Maersk /CMA CGM transatlantic service calling Montreal westbound and Halifax eastbound.

At the same time CMA CGM Butterfly was inbound on its first visit to Halifax.

Although owned by the Claus-Peter Offen group and registered in Hamburg it has adopted CMA CGM's operatic naming scheme for the duration of its charter. Built by Hyundai Heavy Industries in Ulsan in 2008, it measures 111,249 gt, 120,934 dwt and has a capacity of 9658 TEU including plugs for 700 reefers. 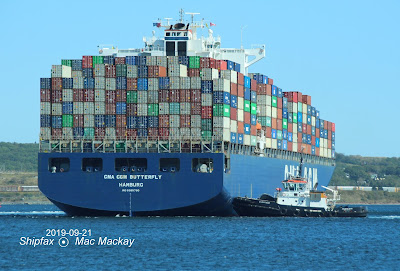 In another part of the harbour there was an unusual operation underway. The bulk carrier Fearless had arrived at anchor for underwater hull cleaning. 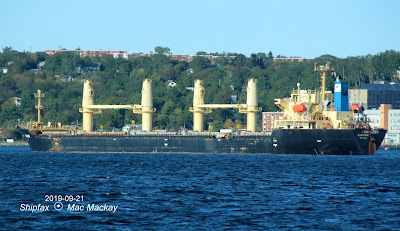 The Naikai shipyard in Setoda, Japan built the ship in 2001 as Bright Laker, a name it carried until 2013. The 18,049 gt, 30,778 dwt bulk  carrier carries four cranes and has been a regular caller to the Great Lakes. Most recently it loaded (likely grain) in Thunder Bay, ON September 5 to 8. The requirement for hull cleaning may be to rid the ship of some invasive species such as zebra mussels acquired during its  visit to the Lakes.  Not only can these pernicious pests be transported to other ports, they can also clog cooling water intakes.

A stiff breeze from the north encouraged the cruise ship Zuiderdam to back away from its berth at pier 20 on departure, rather than sailing north about George's Island. 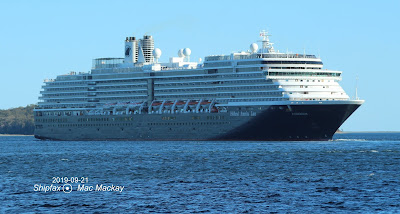 The 82,820 gt, 1916 passenger ship was  built by Fincantieri, Marghera and is the first of Holland America's Vista class. The ship is equipped with three bow thrusters and electric drive azipod props aft. It has an unusual integrated electric propulsion system, originally designed for warships. Its three 16 cylinder and two 12 cylinder Sulzer main engines and a GE gas turbine generate electricity to power the thrusters, ABB azipods, and all other electrical service needs of the ship. One of the benefits of electric drive is the elimination of propeller shafts, a common source of vibration in passenger ships. It also allows for positioning of the engine room in the most convenient location. The omni-directional (azimuthing) pod drives provide thrust in any direction for ease of manoeuvring. 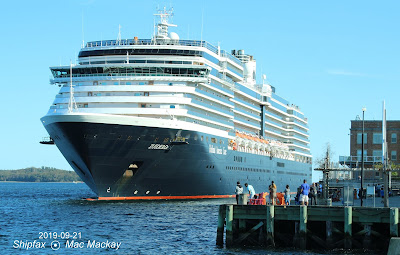 This system allowed the ship to move off the berth laterally without the aid of tugs, entertaining the many waterfront walkers enjoying the last week end of summer.