The propulsion motor failure on CCGS Hudson reported here December 17, 2021 has proven fatal to the future of the ship. The Department of Fisheries and Oceans announced today that the ship will be retired and not repaired. This leaves the department without its principal occeanographic and hydrographic research vessel. Adding to the problem is the embarassing fact that another year has now been tacked on to the delivery date for the replacement ship, which may now be delivered in 2025 even with ballooning construction costs. The department will be forced to hire in ships, at great expense, if it hopes to complete research programs that are vital to ongoing science. 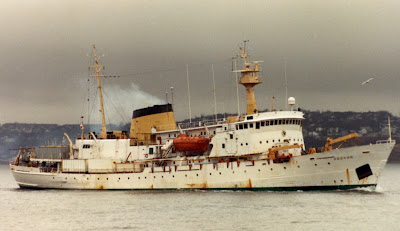 Built by Saint John Shipbuilding and Dry Dock in 1963 and commissioned in 1964, the 3444 gt, ice classs 2 ship has had many achievements over the years. Circumnavigating North America in 1969 and the western hemisphere in 1970 are only the most noteworthy events in an unprecedented history.

Initially serving the Canadian Oceanographic Service, as CSS Hudson (Canadian Survey Ship) it carried the same traditional white hull and buff funnel of its predecessors such as CSS Acadia. With government re-organizations it came under the control of the Minister of Fisheries and Oceans, Canadian Coast Guard in 1996. It then acquired the red hull paint and became CCGS Hudson. Its base remained the Bedford Institute Dartmouth (Halifax) and it was often seen sailing in and out of Halifax harbour. 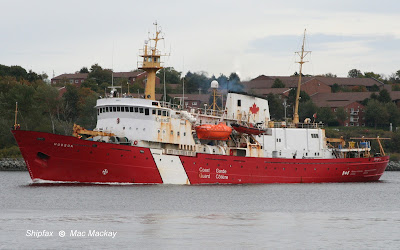 As the years went on refits became more extensive and more lengthy and as more problems were "uncovered" and had to be repaired, more costly too.

It is apparently one of the electric propulsion motors that failed, since the diesel engines themselves are virtually indestructable (despite being of 1951 design). Those engines are still available from current license holders Fairbanks Morse. The generators and electric motors may not be "off the shelf" however, which would explain the current situation. Replacement would likely take a year, for only a two to three year additional service life. Press reports indicate that the ship would also need other upgrades to meet current standards. 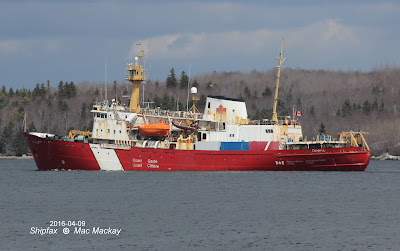 A particularly attractive ship, its graceful hull lines will be missed. Ships with hull sheer are rare these days!

It will take some time to decommission and de-store the ship, not to mention arranging for it to be scrapped in an environmentally acceptable manner, so it will be with us in some form for quite awhile yet, although non-operational.

The Hudson replacement, orginally due in 2017, but now with a price tag of $1 billion and rising, (up from $108 million), is to be built by Seaspan in Vancouver. Even the recently revised delivery date from 2024 to 2025 is not guaranteed.