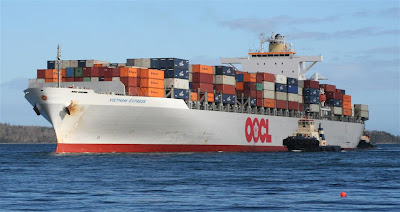 The former OOCL Italy arrived today, with a brand new name, Vietnam Express. The ship is running on the Grand Alliance service, a troika of OOCL, NYK Line and Hapag-Lloyd, which has just re-organized its service somewhat.
Previously their Asia-East Coast Express (AEX) service used all post-Panamax size OOCL ships. With the re-organization some OOCL ships on the AEX route will be switched to Hapag-Lloyd names. This particular ship continues to be owned by Nissen Kaiun, but presumably is now on charter to Hapag-Lloyd rather than OOCL.
Thus OOCL Italy becomes Vietnam Express with a few flicks of the paint brush.
The ship was built in 2007 has a gross tonnage of 66,462, is rated at 5888 TEU and is registered in Hong Kong.
The name change took place April 1, so it it will be interesting to see if the ship will be repainted in Hapag-Lloyd colours.
The Grand Alliance's second service to Halifax, the Pacific Atlantic Express (PAX), will continue to use Hapag-Lloyd ships of 4600TEU, which will still use the Panama canal.

As a sidebar, Svitzer Canada normally berths the Hapag-Lloyd ships and Atlantic Towing berths the OOCL ships. All of Atlantic Towing's tugs are away from Halifax today to retrieve barges for the salvage of Scotiadock II, so the only tugs available today are Svitzer's. Whether this was a Svitzer job or not remains to be seen.
Posted by Mac at 7:48 PM