A tip of the Fedora 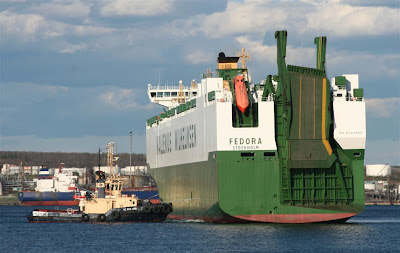 Wallenius-Wilhelmsen's autocarrier Fedora moved over to pier 31 this evening after unloading cars at Autoport. After working some oversize cargo she sailed at 8:30.
There is no really attractive angle to view these ships, but this more or less stern-on shot shows the huge ramp in the stowed position.
The tug Svitzer Bedford was working near the stern of the ship and Point Chebucto near the bow. The crude oil tanker Sea Prince is berthed at Imperial Oil in the background.
Wallenius ships are named for operatic characters, and this is no exception. Fedora was a role originated by Sarah Bernhardt in the play Fedora, written for her in the 1890s by one Victorien Sadou. In the play she wore a hat which became known as a fedora, and was stylish for women well into the 20th century. The opera Fedora by Umberto Giordano was first performed in 1898 and included Enrico Caruso in one of the roles.
The fedora eventually became a man's hat until losing favour in the 1950s. The demise of the man's hat was blamed on the automobile, because it was difficult to fit into a car with a hat on. So perhaps it was with some irony that Wallenius named an autocarrier after a hat!
Posted by Mac at 9:52 PM