USCG Thunder Bay-off to the Lakes 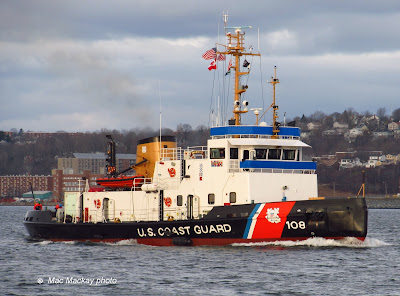 The diminutive US Coast Guard icebreaker Thunder Bay sailed a few minutes ago for the Great Lakes. The ship will spend the winter there breaking ice to extend the navigation season in Lakes Erie, St.Clair, Huron and Michigan and the St.Clair and Detroit Rivers. Since there are no locks in that region to freeze up, ships can keep running well into the New Year and beyond, given effective icebreaking.
The Bay class of miniature ice breakers are capable despite their size. At only 140' long, 2,500 hp on one prop, they can run continuously through 20" of ice and can break ice 8 ft thick by ramming. Of course Great Lakes ice is new ice - multi-year ice exists only in the arctic- but even so that is decent performance, and enough to keep ships moving.
The USCG and CCG co-operate in icebreaking in the Great Lakes region and it is not unheard of for these USCG boats to go into Canadian harbours and conversely for CCG boats to break into US waters.
Thunder Bay was launched in 1984 and commissioned in 1985. Its pennant number is WGTB 108, which indicates that the USCG classes it as a tug boat. As with the CCG, boats are multi-tasked, but towing is not this one's primary job. In summer it is based in Rockland, ME but does travel farther afield as warranted.
.
Posted by Mac at 3:49 PM