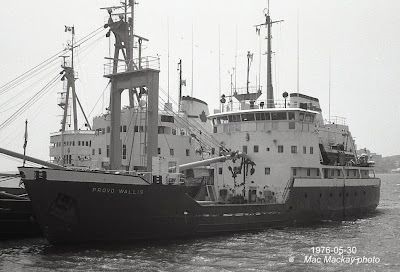 1. CCGS Provo Wallis alongside the Dartmouth Coast Guard base in 1976. Even at that early date the lower bridge windows were covered from inside. 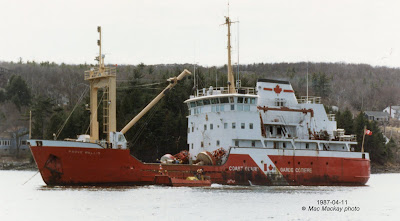 2. Anchored in the Northwest Arm of Halifax harbour setting out summer buoys. The crew are using the landing craft/workboat to get to some really shallow spots. The boat is worked from a big gantry davit. 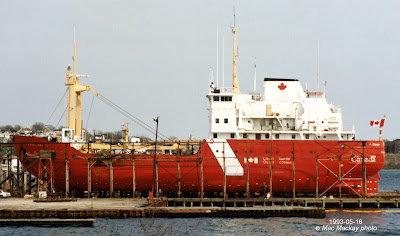 3. Post refit, the ship shows its form on the cradle at Dartmouth Marine Slips. The icebreaking bow is normally not visible. The draft is also relatively modest. 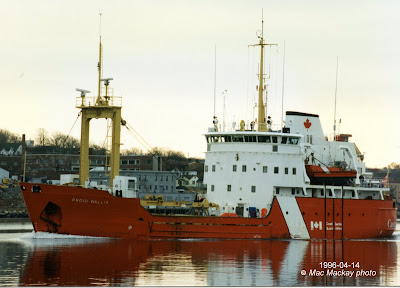 4. An early morning run up the Narrows in Halifax. Note the workboat has new davits, the hull is 20 ft longer and the derrick system is new. Also the lower bridge windoes are gone. They added rub rails for the work boat post-refit. 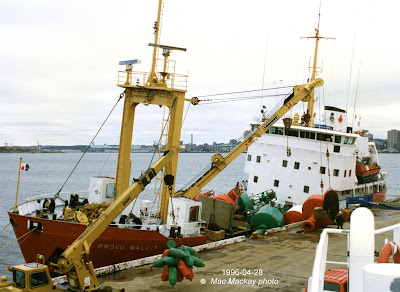 4. Healing over at the Coast Guard base, Provo Wallis loads a freshly painted summer buoy.

5. Part of the refit work included installing a fast rescue boat on the starboard side.

The government of Canada, through its Crown Assets Distribution agency has just listed for the sale the former CCGS Provo Wallis.
Built in 1969 by Marine Industries Ltd, in Tracy, QC, (Hull No.387) it was a navigation aids tender with light icebreaking capability. At 189-5" long and 1313 gross tons, and relatively shallow draft of 12'-6", it was able to service small ports, bays and rivers in Atlantic Canada, and was based in Halifax.
Provo Wallis was a fine vessel, and in 1990 it was dispatched to Marystown, NF where it was lengthened by about 20ft. At the same time it received a new derrick system, rated at 20 tonnes and other modernisations. One feature that it lost in the refit, was most of the low level bridge windows. This second tier of windows at deck level of the wheelhouse had been covered from within, almost from the time the ship was new, but now they were plated over. Only the windows at the extreme outer edges of the bridge remained.
The ship was now classed as a Medium Endurance Multi-Tasked Vessel. It would respond to Search & Rescue calls, conduct patrols, protect the environment and whatever other tasks could be fitted in.
The ship went into cold layup at the Dartmouth Coast Guard base in May 2003, but was taken out of mothballs in March 2006 and sent to St.John's for a refit. On its return in May it left for the west coast where it was to replace sister ship cover for CCGS Sir Wilfrid Laurier while it was in a major refit. At the time it was said that Provo Wallis would be coming back to the east coast when the Laurier returned to service.
Sister ship Bartlett (MIL Hull No. 388) had been based in St.John's and Parry Sound, ON but had been on the west coast for several years, and was retired in 2006 at about the time the Wallis got to Pat Bay, Altough its propulsion controls were upgraded by Halifax Shipyards in 1988, it had not been lengthened and still had its original derrick system.

It came as a surprise to me when Bartlett was chosen for a life extension refit at Allied Shipbuilders in Vancouver. Starting in July 2009 and ending in September 2010, the $21.9mn project was intended to extend the ship's life for 10 years. Both ships still have their original twin Mirrlees-Blackstone 6 cyl engines, producing 2,100 bhp total and driving twin screws, giving 11 knots.
When Bartlett returned to service Provo Wallis was decommissioned and renamed 2011-02 and is up for sale. The reserve price is $400,000.
Details of the ship and its equipment can be found at: http://www.crownassets.pwgsc.gc.ca/mn-eng.cfm?snc=wfsav&sc=enc-bid&scn=83112&lcn=227175&lct=L&srchtype=&lci=&str=1&ltnf=1&frmsr=1&sf=ferm-clos
.
Posted by Mac at 6:14 PM