A rare sight these days is a tanker at the Nova Scotia Power generating station in Tuft's Cove. The plant was converted to burn natural gas, so it was a bit of a surprise to see the ship Asopos which arrived earlier this morning.
Built in 2006 by Sumitomo Heavy Industry and Marine Engineering Co Ltd in Yokosuka, Japan, it is a Panamax crude oil tanker of 35,711 gross tons and 61,286 deadweight tonnes. One of seven sister ships operated by Pleiades Shipping Agents of Greece (with offices in the UK and Stamford, CT) it is registered in Liberia. Pleiades also operates a pair of Aframax crude carriers and has three crude/product/chemical carriers on order.
The ship's last port was New York, and it arrived with much less than a full cargo of black oil. The cargo was likely purchased by NSP on the spot market at a bargain price -possibly for incineration.
Unlike the more usual Korean built tankers we see these days, this ship has a dramatically raked stem and prominent bulbous bow. 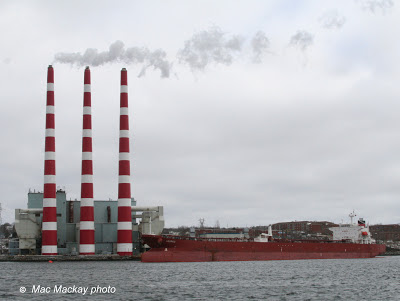